Another week has officially come and gone, and this one was rather productive. While there were concerns about the legislature stalling early in the session, more than 30 bills were advanced to the next round of debate this week. Among those bills that were advanced is one that is very near and dear to my heart.

Senator Walz brought a bill this year, LB444 which will do a great service for our state’s first responders. The bill makes sure that if a first responder is injured in the line of duty, the city or county they work for cannot cancel their health insurance policy if the injury has forced the police officer, firefighter or EMT to fall below the needed hours worked to normally qualify for health benefits. In other words, as long the first responder continues to be an employee of the city or county, that city or county must continue to offer health insurance to the employee. In the interest of fairness, there is a caveat included in the bill that was brought forward by the Judiciary Committee. The committee’s amendment says that the city or county can cancel the health insurance they are carrying if the first responder does not return to work in some aspect, inside of one calendar year. I was proud to vote for this important piece of legislation, and it advanced to the second round of debate on a 33-4 vote. 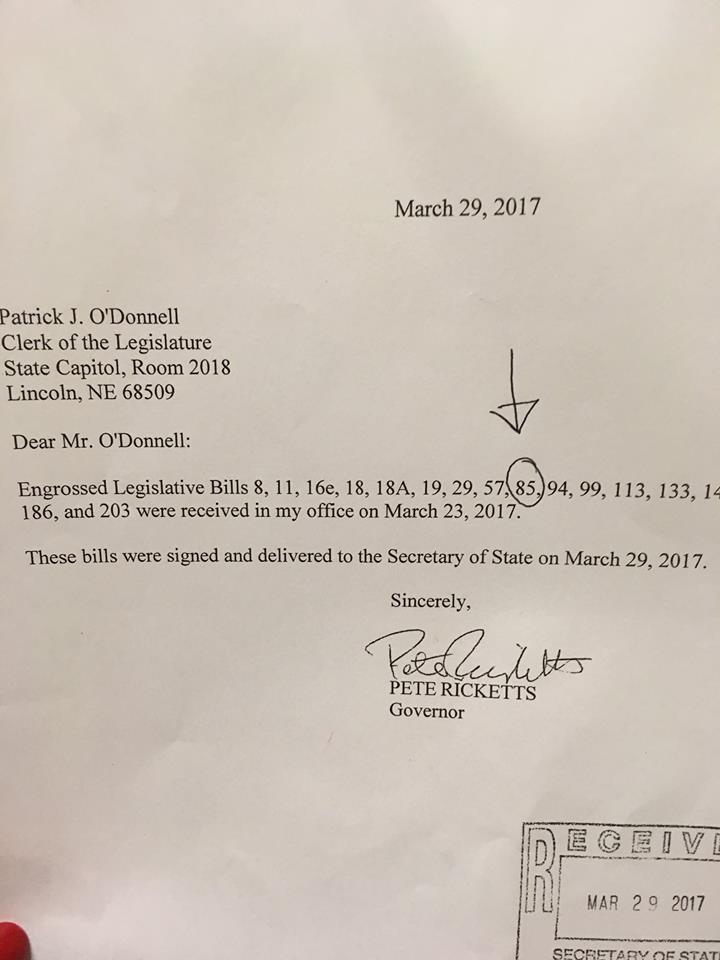 One of my bills officially became the law of the land this week as well. LB85, which would stop anyone from running for public office, or be appointed to public office if they owed fines to the Nebraska Accountability and Disclosure Commission (NADC), was signed by Governor Ricketts. This law will make sure that public servants are held accountable and will weed out the people who aren’t willing to own up to their obligations. Since its introduction, through committee and three rounds of debate, the bill never received a single “no” vote.
Another of my bills, my priority bill LB88  will likely be heard on the floor starting next Monday for the second round of debate. In addition to helping military families by allowing military spouses attain temporary licenses in more than 30 professional fields while they apply for their permanent license, the Health and Human Services Committee asked me to allow LB88 to be the vehicle to carry an amendment that included four other bills that are similar to mine. The amendment includes parts of LB342 (Adopt the Nurse Licensure Compact and provide for temporary nursing license for military spouses) which is Senator Erdman’s bill, Senator Crawford’s LB425 (Change and eliminate provisions relating to the Nurse Practitioner Practice Act), Senator Kolterman’s LB61 (Adopt the Interstate Medical Licensure Compact) and finally Senator Riepe’s LB283 (Change and eliminate provisions relating to licensed practical nurses). This bill is a shining example of how we can work together for the greater good of Nebraska and create effective policy through a team effort.
In case you haven’t checked it out yet, the Tax Foundation Facts and Figures for 2017 book was recently released. This booklet compiles a huge amount of information about how Nebraska fares compared with other states when talking about categories like State and Local tax collections per capita. This information is also online at the Tax Foundation’s Website and you can download it or even get a smartphone app to have it at a glance at all times. I encourage you to study these numbers as I know I will be.
Posted in Column