Yesterday I had the opportunity to introduce LB50 to the Revenue Committee. I want to take a moment to talk about why LB50 is a common-sense proposal to both promote economic fairness, as well as generate revenue for our “Rainy Day Fund.”

LB50 will rehaul Nebraska’s income tax brackets. Currently, everyone making more than $29,000 per year is taxed at the same rate of 6.84%. Under LB50, low and middle income-ea 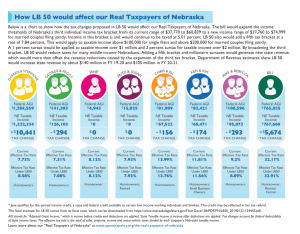 Over the past four years, Nebraska’s cash reserves, also known as our “Rainy Day Fund,” has been cut in half due to consistent downturns in projected revenue collected from state taxes. In addition, Nebraska’s population is rapidly aging and becoming increasingly urban. This massive demographic shift means that in our near future, there will be greater demands on services that can be harder to deliver in lower population areas.

LB50 will both generate revenue and ensure that our future generations have the same, if not more, opportunities than we do. Projected to increase revenue to the state by over $475 million over the next five years, LB50 will shore up our state’s financial future and enable us to continue delivering services that support “the Good Life.”

However, I am not the only one who is in favor of what LB50 would accomplish. In fact, a vast majority of Nebraskans are! A poll conducted in January of 2018 showed that nearly 8 in 10 Nebraskans support an income tax increase for people that earn more than $1 million per year. This is even broader support than Americans nationwide. A nationwide poll from January 12, 2019 shows 70% support for the same measure, including 56% of rural voters. 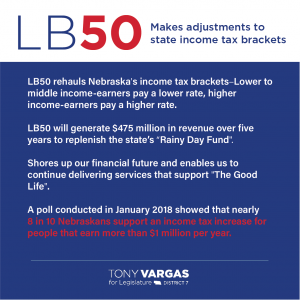 It is vital that as our state demographics continue to shift, and our cash reserves continue to deplete, we seek innovative ways to replenish our “Rainy Day Fund” and give ourselves room to grow. I am confident that should LB50 be adopted, it would have a tremendous positive impact on growing our state and ensuring its viability in the 21st century.

Posted in Uncategorized
Some Highlights from the Last Day of Bill Introduction
January 24th, 2019

Yesterday was the last day for bill introduction and this year I have introduced 26 bills. I spent the interim working with stakeholders in our district and across the state, and I am proud to share my legislative agenda with you.  Here is a little more information about some of the legislation that I have introduced and how it will impact District 7:

LB 50 – LB50 will adjust state income tax brackets, lowering taxes on low and middle income earners and raising taxes on our state’s top earners — income over $1 million will be taxed an additional 1% and income over $2 million will be taxed at an additional 2%. I know well the struggles that working families in our communities are facing. LB50 evens the playing field a bit  more by asking workers making more money to contribute more.

LB 310 – LB310 (reintroduced from 2017’s LB272) would expedite the process of receiving a Historic Tax Credit. This tax credit is used by developers to rehabilitate and revitalize historic buildings, benefiting both rural and urban areas communities across our state.

LB 723 – LB723 will lower the excise tax placed on our local breweries. I am thankful to the many who have reached out to me with concern regarding LB 314 & LB 497, two pieces of legislation that will raise the taxes on local Nebraska breweries. LB 723 is a viable alternative that honors the cultural and economic contributions that breweries make to our state. Breweries are important cornerstones in our communities — in urban areas like District 7 and in small towns like Ord, Broken Bow, and many more. We should do everything in our power to uplift this up-and-coming robust, vibrant industry.

LB 724 – LB724, or what my office refers to as the GIRL (Gender Inclusivity and Recognition of Leadership) Act, will require any corporation that wants to receive tax benefits under the Nebraska Advantage Act to have women compose at least least half of its board of directors. Study after study shows that when women are paid equally and given opportunities to advance both our economy and our families do better. For too long, Nebraska’s principles of fairness and equality have not been adequately extended to all those live or operate in our state. It’s time to put our money where our mouth is and ensure our tax dollars are used to properly incentivize companies that recognize the contributions of women and prioritize gender equity.

LB 732 – LB732 will streamline the permitting and inspection processes for food trucks. I was happy to work with the many food truck owner-operators from the Omaha area to craft legislation that makes it easier for them to operate across the state by removing some of the government red tape and standardizing permit fees and registration processes.

LB 737 – LB737 aims to provide a better picture of projects done using money from the Affordable Housing Trust Fund by changing reporting requirements. With the need for affordable housing rising in District 7, it is important to me to ensure these tax dollars are being used to effectively address this growing problem.

In 2018, Nebraskans expanded Medicaid, ensuring that more than 90,000 neighbors, family members, friends, and citizens across our great state receive access to the basic right of healthcare. Though the measure gained support in both rural and urban areas, Douglas County, and in particular, District 7, favored expansion by some of the widest margins in the state. I look forward to fulfilling my promise to fight for District 7 and ensuring that our community has access to affordable healthcare.

Our district has the highest rate of uninsured people of any in the state. For too long, healthcare costs have been too high and unaffordable. We have seen thousands of hardworking Nebraskans left behind by insurance companies, either unable to afford care or turned away for no fault of their own. Medicaid expansion will not only bring down the cost of healthcare, but will also provide 90,000 more Nebraskans with the safety, comfort, and dignity that comes with the basic right o 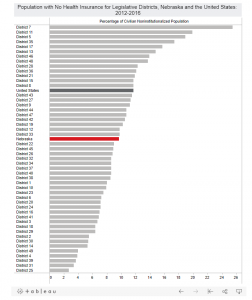 As Nebraskans, we understand the importance of looking out for another and building strong bonds with our neighbors. I am so proud that our state took that next step, and now, it is the Legislature’s turn to fulfill their promise to Nebraskans. Though Governor Ricketts mentioned funding for Medicaid expansion in his State of the State address on Tuesday, as a member of the Appropriations Committee, I will fight to guarantee that Medicaid expansion is fully funded and recognized as the will of the people, and not at the expense of other critical programs like education and services for children and seniors.

In other news, I have dropped two more bills so far this week. LB 292 will help to fund the Microsoft Imagine Academy, a program designed to give students and teachers the training necessary to advance in a tech-driven economy. I also introduced LB 310, which would expedite the process of applying for a Historic Tax Credit. This tax credit benefits rural and urban communities alike, including District 7. The Historic Tax Credit program is crucial for ensuring that communities across our state maintain their  beautiful histories.. Over the next few days, I will be introducing several more, so keep a lookout here!

Last Wednesday marked the beginning of my second session representing District 7 in the Legislature. I am so excited to get back to work on behalf of the wonderful people of District 7.

On the first day of the legislative session, I was honored to be elected by my peers to serve as Vice Chair of the Executive Board, a role that will require the continuation of the bipartisan, consensus-forming approach that I have taken during my first two years in office. 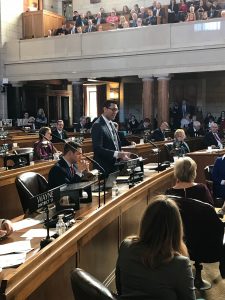 Before discussing what my plans are for this legislative session, I want to take a moment to revisit all that we have accomplished in just two years. My work has been marked with a commitment to developing positive working relationships with Senators from every corner of our state and from a wide range of ideological perspectives. Together, we have been able to pass legislation and a budget that is fair to as many of our Nebraska neighbors and communities as possible.

I have been honored to serve on the Appropriations Committee under Chairman Stinner and Vice Chair Bolz, two great leaders, which has given me critical experience in having difficult conversations to resolve differences and find compromises to balance our budget and make smart investments for our future while best serving Nebraskans.

Last session, I introduced and unanimously passed my priority bill on payday lending reform, LB194. Working together with the Banking Committee and a bipartisan coalition of urban and rural senators, we came together around a common goal that is supported by nearly 90% of Nebraskans. Together we took a pragmatic approach to tackle this important issue and began to bring more economic fairness to working families in our communities.

My values driven and consensus seeking philosophy has also been demonstrated through my work as Vice Chair of the Legislature’s Planning Committee and as Co-Chair of the Juvenile Detention Alternatives Initiative, where I have worked together with stakeholders on common sense, evidence based, cost-efficient juvenile justice reform. Just last year we took a huge step in child welfare and passed my bill to end detention for children under the age of 12 for good with a supermajority vote.

We are currently in the process of introducing bills (you can keep an eye on introduced legislation here), and on the second day of the session, I introduced LB50 & LB51. LB50 is a bill that will adjust state income tax brackets, creating an additional bracket of 7.84% for those making more than $100,000, and levy an additional 1% tax for those making more than $1 million and 2% for those making more than $2 million. I have always been an advocate for economic fairness, and my goal with this bill is to alleviate the tax burden placed on low income and middle class families and more evenly place it on our state’s highest earners. LB51 upholds free market principles and consumer choice by allowing Tesla to sell their automobiles in Nebraska for the first time. Over the next eight days, I plan to introduce many more bills that are important to the people of District 7.

On a personal note, the next couple of months will become even more exciting as my wife, Lauren, and I welcome our first child in the spring. Though nerve-wracking, I am so grateful to be able to bring our baby girl into a community as wonderful, loving, and caring as District 7.

You are currently browsing the District 07 Blog blog archives for the year 2019.