The content of these pages is developed and maintained by, and is the sole responsibility of, the individual senator's office and may not reflect the views of the Nebraska Legislature. Questions and comments about the content should be directed to the senator's office at shalloran@leg.ne.gov

Update from the Unicameral
April 7th, 2017

Last week we reached day 60 of the Legislative session.  This means we are two-thirds of the way through the 90 day session.  We have much more to cover in the next 30 session days, including passing the 2018-2019 biennial balanced budget.

The early part of week focused on LB46 which would provide for “Choose Life”  License Plates in the State of Nebraska.  The bill successfully was moved to a cloture vote after a long filibuster attempt lead by Senator Ernie Chambers.  During the filibuster Senator Chambers offered no less than 25 floor amendments to prolong debate. Most of these amendments dealt with changing the wording of the plate.   Some of these proposed changes were;  “Honest Officials,” “Abolish Death Penalty,” “It Could be Worse,” and “This Too Will Pass.”

Senator Chambers was correct on one point, this too will pass. Governor Pete Ricketts signed LB46 into law on Wednesday stating, “This is the first pro-life legislation signed into law in years.”

“Across Nebraska, pro-life values permeate our culture,” With this bill, Nebraska joins numerous other states who offer ‘Choose Life’ license plates.   While this is a small step, it is an important one for pro-life Nebraskans. Thank you to Senator Watermeier, Senator Friesen, and each senator who voted for this legislation. The broad-based support reaffirmed that being pro-life is non-partisan in Nebraska.”

This week we also debated LB68 introduced by Senator Mike Hilgers of Lincoln. This bill looked to harmonize the patchwork of firearms laws across the state.  Currently, a person traveling across the state in a motor vehicle could in one part of the state be in full compliance of the law and in another part of the state be in violation of law.  Active debate lasted for several hours and many amendments were introduced. At the end of the day it was clear that debate would continue for some time, so the Speaker at his discretion, seeing the need to address other bills, pulled LB68 from the agenda for the following day.  This is not an uncommon practice especially when the session time is growing short and other bills need to be heard and voted on.   This same situation arose on the Thursday with Senator Morfeld’s bill – LB173 dealing with discrimination based on sexual orientation and gender identity.  Now this does not mean that these two bills are dead. They may be introduced later in the session or held over until the next session.

Alex, my Administrative Assistant was able to attend the Nebraska Department of Education Youth Leadership Legislative Breakfast at the Cornhusker Hotel in Lincoln on Thursday, April 6th.  He met with several FFA student delegates from our District (see picture below).   If you or a group are visiting the state capitol please let my office know, we would thoroughly enjoy meeting with you. 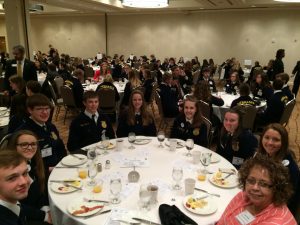