A task force in 2008 chaired by Senator Avery identified changes needed in Nebraska to better support our military assets and people.  Senator Crawford noted that Nebraska has made progress on most but still has work to do in several areas.  She put forth new policy recommendations for the committee’s consideration, including easing career licensing transfer and portability for separating military members and military spouses.  “Separating military professionals and military spouses bring valuable skills to the workforce.  Recognizing those skills allows us to strengthen our workforce and help these men and women support their families here in Nebraska” she said.

The hearing also addressed the policy recommendation to waive required waiting time for qualified veterans who establish residency in Nebraska so that they are able to use their tuition assistance and continue their education here in Nebraska.  “Because of the economic and workforce development opportunities this policy could bring to the state, I intend to introduce a bill next session addressing this issue,” she said.

Senator Crawford pointed out that the Legislature has recently made progress on many issues that support military families  “Many of these investments strengthened military infrastructure in the state,” she said.  “It is now time to invest in its people. I hope this hearing leaves you with a sense of some of the options available to us moving forward. I look forward to working on the advancement of several of these initiatives next session, including career licensing and tuition assistance for veterans looking to relocate to Nebraska,” she said.

Also testifying at the hearing was Dr. Frank Harwood, Superintendent of Bellevue Public Schools.  He discussed the advantages of the Interstate Compact on Educational Opportunities, which offers statewide benefits to students and military families.  One of the proposed recommendations would provide permanent funding for the compact. 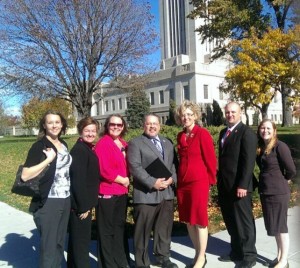