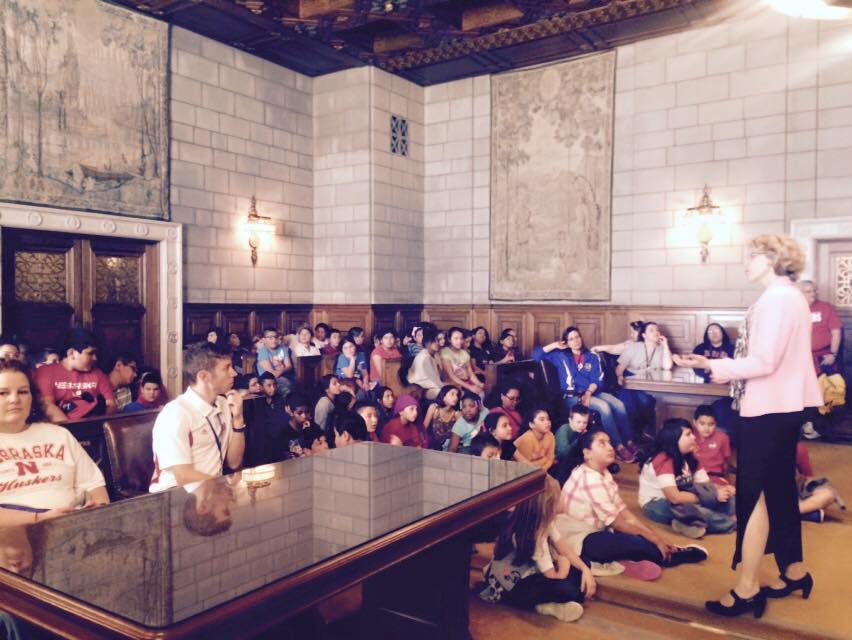 Big group visiting from Chandler View! Thanks for your great questions!

On Thursday, the Legislature sent 9 bills to Governor Ricketts for his signature.  Included in this package were bills ranging from changing DNA testing requirements for criminal cases, revisions to sanitary improvement districts, and changes to our Guardian ad Litem program for children in the child welfare system.

LB 245, a bill introduced by Senator Patty Pansing Brooks, clarifies when DNA testing is allowed under the DNA Testing Act.  Under the bill, DNA evidence that was not previously tested or evidence where current technology could provide more accurate results can be tested or retested if a court finds the evidence materially affects the rights of the defendant.  This bill is supported by the Nebraska Innocence Project and the Nebraska State Bar Association.  LB 245 passed on a 42-4 vote.

LB 324, a bill introduced by Senator John McCollister, would allow sanitary and improvement districts (SIDs) to contract for solid waste collection services, aka garbage collection.  An Urban Affairs Committee priority bill, the bill as amended also includes the provisions of two other SID-related bills heard by this committee this session, including LB 420, a bill I introduced to provide new homebuyers with information about SIDs when they purchase a home located in an SID.  LB 324 passed on a 44-3 vote.

LB 15, a bill introduced by Senator Bob Krist, makes changes to our Guardian ad Litem program to better protect our most vulnerable children.  This summer, the Health and Human Services Committee and the Judiciary Committee participated in a joint hearing on LR 542, an interim study resolution examining this program.  Children in the child welfare system are assigned a guardian ad litem, or GAL, to present their best interests during all abuse and neglect court hearings.  This GAL can be an attorney or a court-appointed special advocate, or CASA, volunteer.  LB 15 codifies the Nebraska Supreme Court’s guidelines for GALs in statute.  It also requires more frequent contact between GALs and their juvenile clients and written reports by GALS     detailing the type and number of contacts with their child clients and their client’s foster parent.  LB 15 passed on a 47-0 vote.

Next Wednesday, the Legislature will debate consent calendar bills.  Consent Calendar is a legislative process I featured in a previous update.  This process allows non-controversial bills, often with technical changes, to be debated in a streamlined fashion. The Speaker of the Legislature determines which bills are eligible for Consent Calendar.  This year’s Consent Calendar will be published following adjournment on April 28.

This year I submitted a request for consideration of LB 541 as a Consent Calendar bill. LB 541 brings the retention of expired state contracts posted on the state contract website created by the Taxpayer Transparency Act in line with the state agency general retention schedule of 5 years post-expiration.

Also included in the consent calendar is LB 455, a bill by Senator Mike Gloor that was heard by the Urban Affairs Committee earlier this session.  LB 455 would clarify that a fire chief employed by a city of the first class with a population over 37,500 shall be appointed under the Civil Service Act.  The City of Bellevue is one of just two cities of the first class that meets this population threshold.

On Wednesday afternoon, I joined 33 of my colleagues in supporting LB 294 to strengthen our human trafficking laws.  Sadly, Nebraska faces a growing problem with human trafficking due to its central location, convenience of I-80, and high profile events like the College World Series.  LB 294, as amended, increases penalties for perpetrators of human trafficking, including raising the maximum sentence for sex trafficking of a minor from 20 to 50 years.  LB 294 also allows, for the first time, victims of human trafficking to sue their captors in civil court.