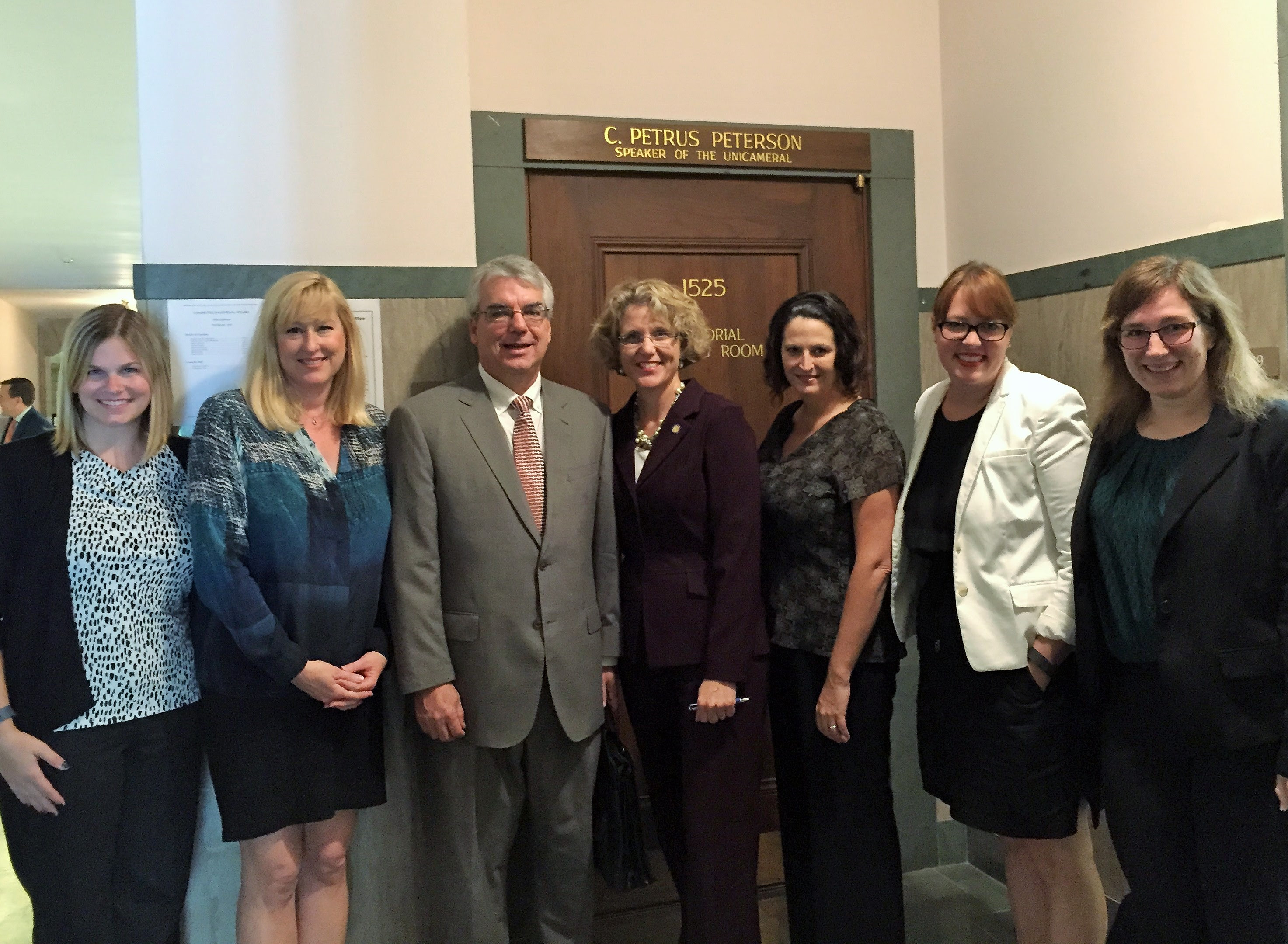 I stand alongside those who testified at the hearing for LR 222 before the Business and Labor committee on September 25th.

Friday, September 25 was a busy day full of interim study hearings.  In the morning, I presented some of our initial findings of LR 222 to the Business and Labor committee.  LR 222 examines paid family leave options available to Nebraska.  Current policies put too many workers in an untenable position: keep the jobs they need or care for the families they love.  States can invest in infrastructure to ensure workers can put families first without sacrificing their jobs.  In each state with an active program, this assistance is financed by modest employee contributions to a state-run insurance system.  In New Jersey, for example, employees pay a maximum of 46 cents a week, or $24.24 a year on the first $30,300 of earnings. The length of time an employee can remain on leave ranges between 4 to 6 weeks.

Families are the bedrock of our society.  For too long we have ignored the fact that we need workers to be able to care for their families, not just for their own sake, but for the sake of all of the rest of us.  Appropriate time to care for infants, aging parents, and family members facing serious illness and injury benefits all us through improvements in our workforce, our educational system, our health care system, and the general health of our society.  Paid family leave, however, is not just about care for others.  Over half of the workers who use federal Family and Medical Leave use it to recover from their own illness or injury. I look forward to continued discussions on how Nebraska can invest in its workers and working families.   If you are interested in learning more about this issue or if you have a personal story that highlights the need for paid family leave, please email my legislative aide Kaitlin Reece atkreece@leg.ne.gov or call the office at (402) 471-2615.

In the afternoon, the Urban Affairs Committee held a hearing on two economic-development related interim studies.  The first, LR 152, examined the Local Option Municipal Economic Development Act, commonly referred to as LB 840.  Passed in 1991, LB 840 allows municipalities to collect and appropriate local tax dollars for economic development purposes, if approved by local voters.  Currently at least 68 municipalities have voted to create an LB 840 program, including the City of Bellevue.  A map of municipalities in Nebraska that have created an LB 840 program can be seen by clicking HERE

The second interim study, LR 155, marked the start of the Urban Affairs Committee’s comprehensive review of current and potential economic development tools available to Nebraska municipalities.  In addition to LB 840 plans, LR 155 will examine tax-increment financing (TIF) and a variety of other programs in state law.  The study will also review economic development tools currently available to municipalities in other states, and whether provisions in the Nebraska State Constitution prohibit similar programs from being created in Nebraska.

On Friday, October 23rd, the Urban Affairs Committee will hold interim hearings on issues related to neighborhood revitalization and energy codes.  The first interim study, LR 278, will examine the existing resources and the need for additional tools for municipalities to encourage revitalization of older and historic neighborhoods.  Issues covered under this interim study will include the need for financial incentives to encourage business investments in declining neighborhoods, methods of encouraging home ownership and rehabilitation of older buildings, and the role that current municipal tools play in neighborhood revitalization.

Earlier this month, our office convened an initial stakeholder meeting regarding LR 223, an interim study resolution I introduced to examine adult basic education in Nebraska.  It was an informative and collaborative discussion regarding current adult basic education programs and the challenges adult basic education (ABE) students face in completing ABE courses and continuing on to receive a postsecondary degree or credential.  Identifying these challenges and developing strategies to move people from ABE to postsecondary education is important both for economic development in Nebraska as well as personal economic development for students.  Nebraska, like many states, is facing a skills gap.  Nationally, estimates show by 2020, 65% of jobs will require some postsecondary education while currently only 40% of working age adults (25-54) have an associate degree or higher.

Friend and Advocate for Veterans Remembered

This month, our office was saddened to learn that a friend and ally on veteran issues, Bill Henry, passed away.  Bill and Larry Schraber started the Nebraska chapter of Missing in America Project several years ago.  Their mission, and the mission of the Missing in America Project, is to ensure no soldier is forgotten and every veteran receives the honorable burial he or she deserves.  Together, Bill and Larry worked with funeral homes to identify and inter remains of military members who for one reason or another were unclaimed.  They fundraised for their efforts–and sometimes reached into their own pockets–to keep the chapter going, ensuring if a family was identified, they never paid a dime. 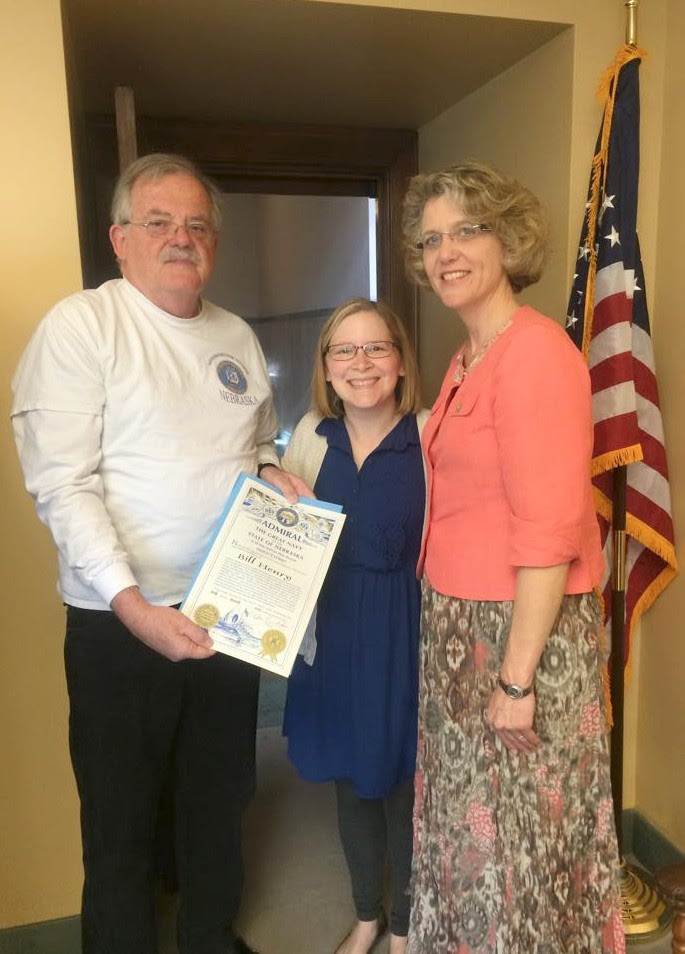 Legislative staffer Kaitlin Reece and I present Bill Henry with an official Certificate of Admiralship, an honor given to those by the Governor for their contributions to Nebraska. The flag in the background was a gift from the Missing in America Project.

Last fall, Bill approached our office with a bill proposal to create a process for veteran organizations, like Missing in America Project, to work with funeral homes to identify unclaimed cremated remains of veterans.  I was honored to sponsor LB 146 which provides important liability protections for funeral homes who work with veteran organizations and establishes a clear process for all players involved.  LB 146 passed unanimously and became law last month.  Just last month, I had the distinct privilege of accompanying Bill and many others to Maxwell, NE as we said goodbye to two soldiers whose remains were previously unclaimed: John Patrick Perez and Michael M. Pegram.  The soldiers’ journey to Fort McPherson, their final resting place, began at Good Shepherd Funeral Home in South Omaha.  We met the funeral procession at SAC Museum early in the morning and received a police escort throughout our four hour journey to the cemetery.

At the time, Bill was excited about a trip planned in a few weeks to Arlington, where he and other Missing in America members would lay to rest several more unclaimed soldiers, some from as far away as California.  Sadly, Bill was in a very serious accident on the way to Arlington and after two weeks in intensive care and in the company of his wife, Patty, Bill passed away peacefully in a Virginia hospital.  He will be greatly missed by those who knew him.  Bill gave his life serving veterans, a beautiful and inspiring legacy.  Rest in peace, my friend.  I hope we, your friends, can continue the work you started.

In the Community
The Brain Injury Association of Nebraska, along with the Nebraska Veteran Brain Injury Task Force, is organizing a “Women of Warriors” weekend conference and retreat for women who support a servicemember or a veteran.  This year the conference is October 16-18 in Aurora, NE.

As a member of the Nebraska Veteran Brain Injury Task Force, I encourage women of warriors to consider attending this year’s event.  It is a way for female caregivers of servicemembers and veterans to connect with other women as well as receive some respite and support.  f you know someone who would benefit from a retreat like this, please share this information with her.  More information on registration, maps and schedule can be found HERE