Bills Signed by the Governor

This week two of my bills, LB225 (my personal priority) and LB590, were signed into law by the Governor. The passage of these two bills will continue to help families across the state access critical services. LB 590 eliminates new stricter building code regulations from our most recent state building code update that would jeopardize many of our in-home daycare businesses.  LB225 contained a package of bills to improve our child welfare system through enhanced data collection and strengthened programs.

Three more of my bills, LB253 (Sarpy Sewers), LB97 (Riverfront Development), and LB255 (Dialysis Patient Care Technician Registration), were advanced in the final round of debate and have been presented to the Governor. Other important bills also found their way the Governor’s desk this week including LB427 which provides accommodations for pregnant and parenting students to help them successfully navigate school and LB 300 which eliminates the civil statute of limitations in cases of sexual assault involving children. Each of these bills will now go to the Governor for his signature. Under Nebraska law, Governor Ricketts will have five days (not including Sundays), to decide what he’d like to do with a bill after it is presented to him. If he signs a bill or chooses not to act on it, the bill becomes state law.

The Governor can also choose to veto a bill; if that happens, the bill is returned to the Legislature with an explanation of why he chose to veto the bill. The Legislature can override any gubernatorial veto with 30 votes.  Though looking at the Final Reading vote count from the Legislature can give you a good idea of number of senators who will vote for or against an override, that is not always the case. Sometimes senators who voted for the bill will choose not to support an override because they feel the Governor has made a good argument in his veto letter, or else they are uncomfortable voting openly against the Governor’s decision. Other times, though more rarely, a senator who did not support the bill originally will decide to support a veto override because he or she feels the Legislature has made a decision, and that the Governor should not be overturning that decision. Either way, veto override votes tend to be closely watched.

Next week we will take up the first bill that Governor Ricketts vetoed this year. LB75 removes the existing two year waiting period for felons who have completed their sentence and any probation and parole to restore their voting rights. The bill was introduced and prioritized by Senator Justin Wayne. This week, one of our bills that passed on final reading allows former felons to possess knives and hunting archery equipment. Senator Wayne noted on the floor after that vote that if 44 Senators were willing to give former felons butcher knives and deadly arrows, they should be willing to give former felons the right to vote. I agree.

The Legislature spent a couple of days this week debating LB415, the Retirement Committee’s priority bill for this session. As an omnibus bill, it contains a large number of proposals and provisions rolled into one bill. Many of those proposals are important policies that will strengthen our public retirement systems. However, some provisions of the bill sparked an outpouring of opposition from teachers, administrators, and school staff. Our office received many emails and calls. Among those controversial proposals were plans to restrict the ability of retired teachers to substitute teach soon after retirement and a three year waiting period for teachers who accept voluntary separation to work or even volunteer in our schools. After many intense meetings over the past two days and a contentious floor debate this morning, I think we have a compromise to protect our retired teachers and our retirement plans. On that understanding, we voted to advance the bill and to work out the details of the compromise before the bill comes back on Select File.

We also spent much time this week debating the budget bills. Many of these conversations went into the late night hours  While we have had to make tough decisions, we have worked hard to protect key investments in our state’s future. Next Tuesday the budget is up for its final vote.  The main budget bill needs 33 votes to pass with an emergency clause, which is important to allow agency spending to continue without any delay.  Several senators have been arguing against the budget, but none of the opposing senators have offered specific spending cuts as amendments during our debate on the floor.  Senator Erdman came the closest with an amendment to adopt last year’s budget, which would have cut some spending.  Senator Stinner, the Chair of the Appropriations Committee, offered an opportunity for the three opposing senators from the Appropriations Committee (Sen. Kuehn, Sen. Clements, and Sen. Watermeier) to offer specific cuts to the last version of the budget before it came to the floor.  None of these members proposed additional specific cuts for the committee to consider. Much of our work behind the scenes this past week has been building support so that by next Tuesday there will be 33 greens for this important vote.

On the afternoon of Thursday May 4th the Sarpy County Chamber of Commerce hosted Sarpy Sundaes, a beloved event at the Capitol where senators and staff are invited to join Sarpy Chamber staff for ice cream and conversation. This event is always well-attended; it provides a break from the rancor of the legislative session, and of course it’s much easier to be friends when ice cream is involved! 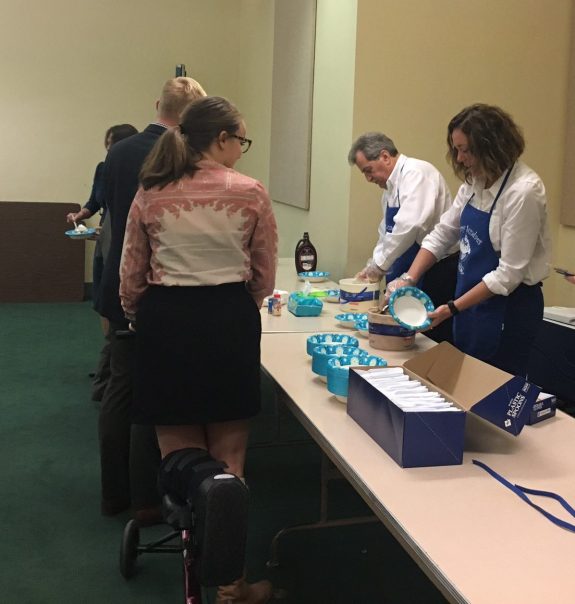 On Sunday April 30th I joined Senator Carol Blood to help hand out Environment Champion Awards at the Sarpy County Earth Day ceremony. The event was founded to honor and recognize individuals and groups that help keep Sarpy County healthy and beautiful, and to provide residents with a fun and informative way to learn about environmental issues. It was a pleasure to participate this year! 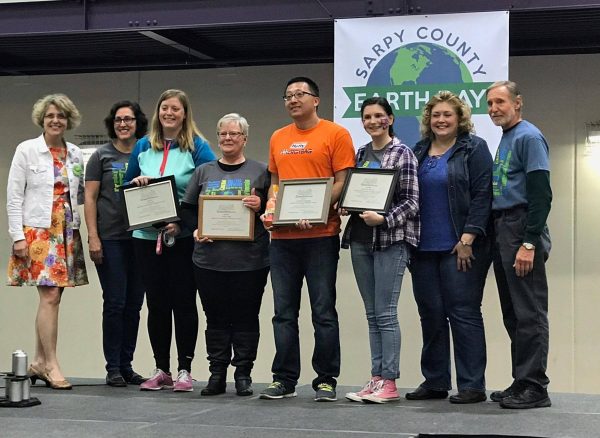 On Tuesday May 2nd Bellevue Public Schools held its annual celebration in honor of all the educators and staff who will retire at the end of this school year. Each year my office asks the Governor to appoint BPS retirees as Admirals in the Great Navy of the State of Nebraska, a serious recognition of merit with a tongue-in-cheek format (you can learn more about our Admirals and the Nebraska Navy here). This year my Legislative Aide, Shayna, was at the ceremony to present the Admiralty certificates and celebrate with the retirees. 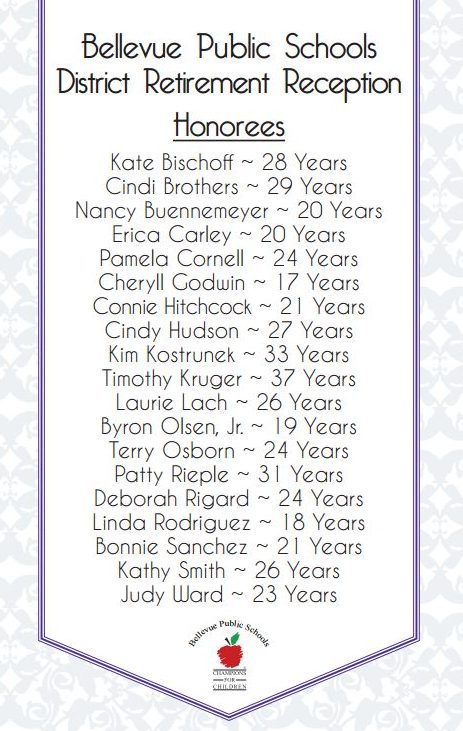 I am so grateful for the long years of service and dedication these retirees have given to BPS, and wish them all the best in their retirement. Their talent and expertise will certainly be missed – but they have earned it!

Mayor’s State of the Town Address

Next week, on Tuesday May 9, the Mayors of Bellevue, LaVista, Papillion, and Plattsmouth will come together for the Mayor’s State of the Town Address at the BPS Lied Activity Center. Running from 11:30 am – 1:00 pm, the event will feature the four mayors discussing both developments over the last year and plans for the future. There will also be a question and answer session. To register for this event, co-hosted by the Bellevue Chamber of Commerce, visit their website here.