This month the Economic Development Taskforce met to discuss the ways in which the arts and humanities contribute to a strong economy and good quality of life in Nebraska. Representatives from Nebraskans for the Arts, the Lincoln Arts Council, Beatrice Community Players, the Northeast Downtown Omaha Arts & Trades District, and the Willa Cather Foundation were able to share unique insights about their organizations’ impacts and their ideas for fostering more creative and historic development. One of the resources provided at the hearing was an overview of policies in place in different states to encourage this kind of development, which you can access here. 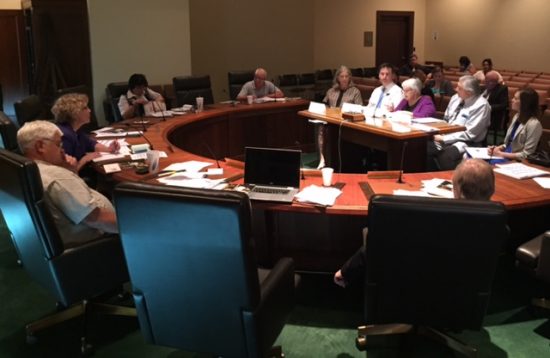 The Economic Development Taskforce meeting at the Capitol

Our office is also hosting a lunch in September at the Capitol to learn more about how Creative Districts have worked in our neighboring state of Colorado.

On August 24th the Urban Affairs Committee traveled to North Platte to hold a public hearing on two interim studies: LR160 and LR60.

The purpose of LR160, introduced by Senator Dan Hughes, was to consider what tools Nebraska municipalities have to offer relocation incentives to prospective new residents. Particularly in more rural areas, skilled workers are in high demand to fill jobs in healthcare, construction, and other fields. For better or worse, our state constitution restricts simple relocation incentives in the form of loan repayment or tax forgiveness that some other states use. On the one hand, this makes it more difficult for our communities to compete with other states; but on the other hand, it also puts up strong protections on use of public money.

LR60, sponsored by the full Urban Affairs Committee, was introduced to give us an opportunity to more thoroughly examine a 2016 report on TIF produced by the State Auditor’s office. In North Platte we heard from some of the municipalities whose TIF projects were cited in the Auditor’s report. In most of these testimonies, municipalities explained how they had changed processes to address the concerns that were raised in the report. Most of these concerns were identified by the auditor as actions allowable under the law, but which raised questions about whether the law should be tightened to restrict these actions in the future. LB95, which I introduced last session, included many provisions to tighten these parts of the TIF statutes.

The Urban Affairs Committee has two more interim hearings scheduled for this fall. The first, in Grand Island on September 29th, will consider my LR138 on municipal condemnation and demolition as well as LR60. The second hearing, to be held in Lincoln on October 6th, will cover LR60 and Senator Justin Wayne’s LR81 on fire codes. To find more details about these or any other interim hearings scheduled by legislative committees, you can access the Legislature’s official calendar here. Hearings will be added throughout the fall as they’re finalized, so check back if you’re interested in specific topics.

The Nebraska Legislature is structured so that senators may only introduce new bills in the first 10 days of each session, but my office often receives bill ideas throughout the year. In addition to the formal interim studies carried out by committees and senators, the fall months are an opportunity to look into those ideas that were brought to my office after bill introduction was over for 2017. In the month of August my office began researching some of those issues and scheduling meetings to learn more about them. Some (but not all!) of the topics we are investigating include protections for student journalists, military retirement taxes, the cost of insulin, staffing ratios in nursing homes, school lunch funding, cottage industry regulations, and many others. Though we will not introduce a bill on all issues, these ideas from constituents are always welcome. Oftentimes our early research suggests non-legislative solutions or improvements in the areas we examine. If you have an idea or concern, feel free to contact the office and share it with us.

Do you know anyone interested in serving as a page for the 2018 legislative session? Pages are college students who assist senators and the Clerk of the Legislature with various tasks, such as running errands for senators during the legislative session, assisting the Presiding Officer, and setting up and staffing committee hearings. The Page Program is open to high school graduates who are currently enrolled in a Nebraska college or trade school, and is an excellent opportunity to learn the basics of state government. It is a paid part-time position, and many students receive college internship credit.

The deadline for applications is Friday September 29th. Those interested in applying should first contact the Clerk of the Legislature’s office at (402) 471-2271 or email Kitty Kearns at kkearns@leg.ne.gov for an application. All applicants are also asked to provide a letter of recommendation from their state senator. If you live in LD45, I would be happy to hear from you!

The Arrows to Aerospace Parade on August 19th was, as always, a great success! This year the parade was designated one of the official events celebrating Nebraska’s 150th anniversary. That meant there was an even wider array of presentations, activities, and attendees than usual. I enjoyed marching in the parade and meeting with Bellevue residents in the park afterwards. I had a table in the park in the afternoon and had several folks stop by to talk. 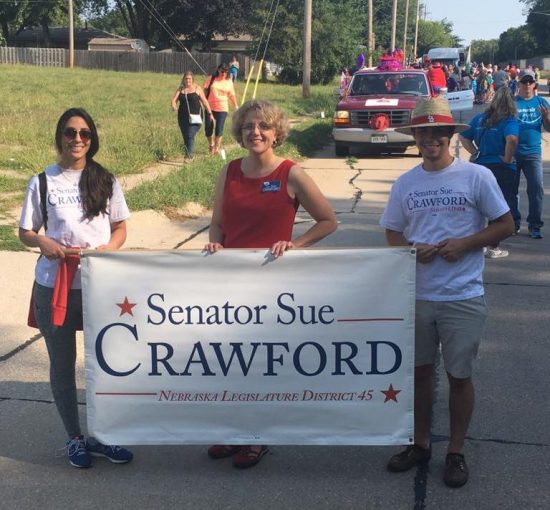 Many thanks to the Bellevue-Offutt Kiwanis and other volunteers who work so hard to make the parade and community event such a success year after year!

Senator Carol Blood and I spoke to the Kiwanis Club of Bellevue on August 17th. It is always a pleasure to join community-minded groups like Kiwanis. Our August gathering provided an opportunity to discuss previous and upcoming legislative sessions alike, as well as answer questions and talk about the priorities and concerns of those in attendance. As usual, it was an engaging and enjoyable time.

My friend and colleague Senator Carol Blood organized an event on August 17th to distribute backpacks full of school supplies to military families in Bellevue who needed a little extra help at the start of the school year. It was an absolute honor to support this event, along with the many other donors and volunteers who made it happen. 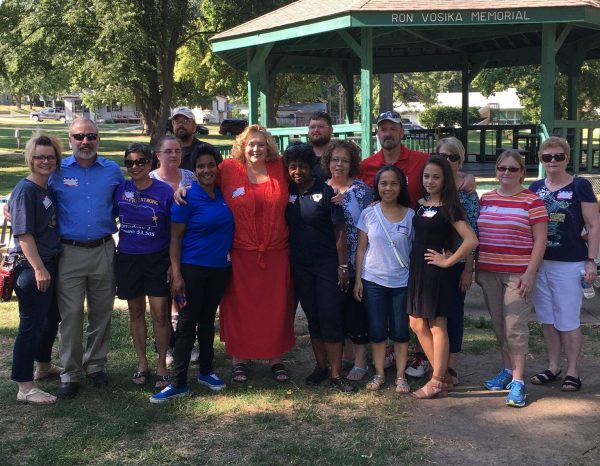 This kind of support for our military families is a big part of what makes Bellevue such a strong community.

Eclipse Day at the Capitol

I hope you all had an opportunity to enjoy at least part of the eclipse that traveled across Nebraska on August 21st! My staffers Christina and Shayna were able to join other legislative staff right out on the Capitol lawns, along with lots of other Lincoln residents and visitors. 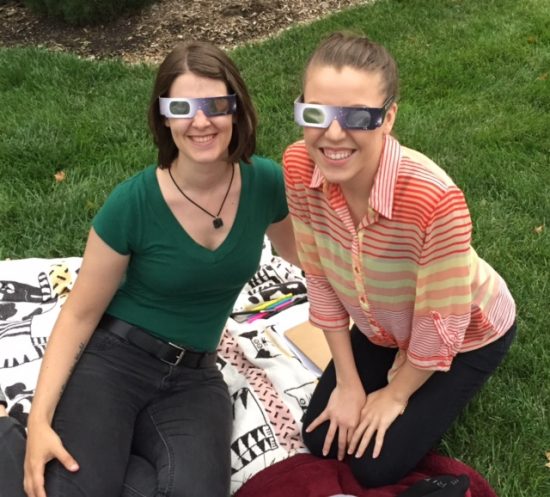 Christina and Shayna getting ready for the eclipse

The eclipse was a great showcase of Nebraskans’ hospitality and welcoming attitudes, and a very cool experience.

Join us on September 11th at 6:00 pm in the American Heroes Park for a moving ceremony to recognize those from Nebraska and Western Iowa who have lost their lives protecting our country since September 11th, 2001. The ceremony includes a moving tribute by the Bellevue West and Bellevue East ROTC students to honor each of these individuals by name. The ceremony also includes the joyful event of swearing in new citizens to our country. In the event of inclement weather, the BPS Lied Activities Center is the alternate location.

The Food Bank for the Heartland and BPS are continuing their partnership to offer mobile food bank access to Bellevue residents. They will visit Mission Middle School on September 20th from 5:00-6:30 pm this month, and will also be there the third Wednesday of subsequent months. 12 to 18 year-olds can also access the mobile clothes closet during food bank distribution times. For more information on the mobile food bank, and to check for any changes to the distribution schedule, you can find their website here.

Offutt and the Human Resource Association of the Midlands are hosting a job fair at the Bellevue Lied Activity Center from 10:00-1:00 on Thursday September 28th. It is open to the public, and especially encourages active duty service members, DoD civilians, veterans, retirees, guard and reserve soldiers, and their family members to attend. For more information, and to see a list of those companies planning to participate, check out their website here.

The Bellevue Farmer’s market will have two more dates this summer – September 9th and 16th from 8:00 am to 12:00 pm. Head to Washington Park for local food and crafts, family activities, and live entertainment. More information about our farmer’s market can be found here.