The Economic Development Taskforce met at the Capitol on October 13th for our monthly public meeting. For October the Taskforce focused on discussing economic development reports from both inside and outside the Legislature. First we had a panel from the Department of Economic Development, who shared the findings of a report on Nebraska’s innovation and entrepreneurship climate. Dan Curran, Dave Dearmont, and Joe Fox presented the report, which concluded that Nebraska’s innovation climate has improved in the last decade, but still has plenty of room to develop. The report specifically noted that limited risk capital, narrow market access for entrepreneurial products, and a small pool of experienced entrepreneurs are all challenges we face in Nebraska. Still, the report did suggest that Nebraska’s innovation climate is maturing, and that is a positive step. You can read the full report here.

Next was Dr. Eric Thompson, who is Director of the UNL Bureau of Business Research. He developed a review system of the Nebraska Business Innovation Act (NBI) to determine how successful NBI has been in achieving its goal: to attract and retain innovative businesses to the state. He analyzed NBI’s five primary programs and determined that for every $1 of direct state spending on the program, $6.72 of capital was raised; that same dollar also resulted in $7.21 in revenue. He also estimates that 967 jobs have been created as a result of NBI programs. His study found that NBI’s programs do have a measurable positive impact, and that Nebraska businesses have been successful in leveraging state support into economic growth. You can download Dr. Thompson’s full report here.

In the afternoon the Oversight Committee talked to Corrections Director Scott Frakes and other corrections administrators about some of the concerns raised in the morning session, as well as other issues that have been raised in the last few months on staff and inmate safety, prison operations, and staff recruitment and retention. The committee also heard from Nebraska Ombudsman Marshall Lux, who stressed the importance of continued legislative oversight. For a full account of the day’s hearings, you can read the Journal Star’s coverage here.

The Judiciary Committee and Oversight Committee will continue their important work through the fall. I will follow their progress closely, and look forward to engaging with the results of their efforts throughout the upcoming legislative session.

The Health and Human Services Committee also met on October 20th, and held an all-day public hearing about occupational licensing reform. We heard from professionals, students, and trainers working in electrology, body art, esthetics, nail technology, barbering, cosmetology, and massage therapy. Last session the Health and Human Services Committee considered LB343, which proposed lowering the number of training and education hours currently required by the state to obtain licensure in specific professions. During discussions of LB343, some professionals raised concerns that lowering the hours requirement could lead to safety issues; others believe that safety would not be at risk, and that lowering the requirement would be economically beneficial to the state and new professionals in those fields.

The Committee therefore chose to study the issue further over the summer and fall, leading to the series of interim study resolutions we took up on October 20th (the full list of resolutions can be found here). Interim resolutions are not voted up or down; they are simply an avenue of study and inquiry, and a chance to engage the public. However, I expect that these studies will inform our discussions on the issue in the 2018 legislative session, and I appreciate all of those who took the time to share their experiences with the Committee.

As you may have seen in the Omaha World Herald or other news sources, the state’s Economic Forecasting Advisory Board met last week and lowered tax revenue projections for the current and next fiscal year. The new projections leave the state with an approximately $195 million shortfall. The upcoming session will present many challenges, and this forecast only makes things tougher. Though we will not know the full extent of any shortfall until the Forecasting Advisory Board meets again in February, I will work for efforts to close any deficit in a responsible and thoughtful manner that does not unduly harm the state’s most vulnerable residents.

In the 2017 legislative session I sponsored LB253, which authorized the creation of interlocal agreements to fund sewer improvements. For Sarpy County, which has had challenges developing south of the ridgeline because of the expense of creating a new sewer system, LB253 provides a path forward for development in the south of the county. On October 17th the Sarpy County Board and mayors of Papillion, La Vista, Gretna, Springfield, and Bellevue held a signing ceremony for this interlocal agreement, and I was pleased to be present. The agreement should spur development in Sarpy County, which will be a boon to Sarpy County’s economy. I am glad to have helped make this agreement possible. 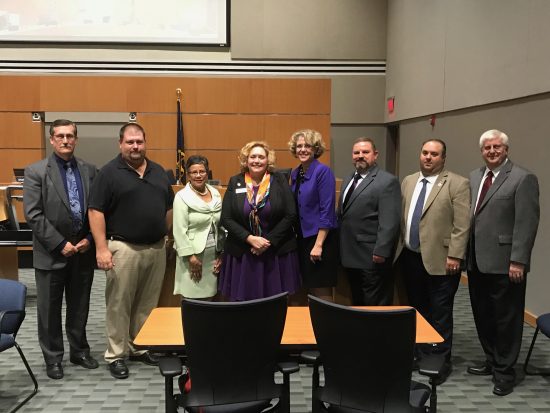 The Greater Bellevue Chamber of Commerce and Nebraska Chamber of Commerce hosted their annual Legislative Forum on October 17th. The forum is an opportunity for Sarpy County senators to share their priorities and thoughts about the upcoming session with business leaders, local officials, and members of the public. Many thanks to the Bellevue and Nebraska Chambers for hosting each year. 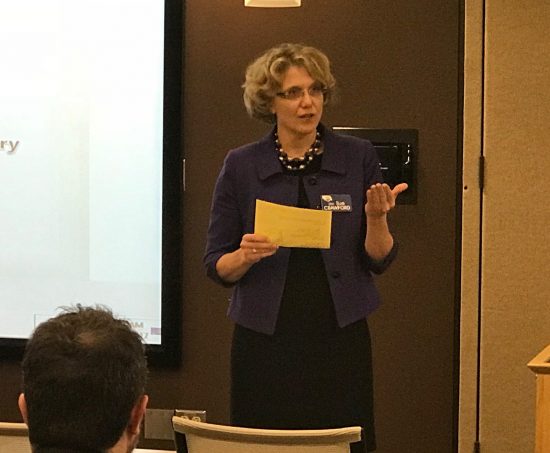 Speaking to attendees at the 2017 Legislative Forum

Each year the League of Women Voters holds a workshop for young women in middle and high school who are interested in future public service. This year, approximately 55 young women from across the metro area came together at UNO to learn about what it takes to get elected, how they can serve, and some of the unique opportunities and challenges that elected women experience. We had the chance to meet with the participants in small groups to answer their questions, give advice, and share our experiences. Like always, this year’s participants were bright, thoughtful young people who want to make a difference in their communities. I look forward to watching them mature into our elected leaders of the future.

The 4th graders of Fairview Elementary had beautiful weather for their visit to Lincoln on October 19th. Though I was working in Bellevue that day, my staff was there to welcome the students to their state Capitol. I hope all the kids had a wonderful and educational visit! 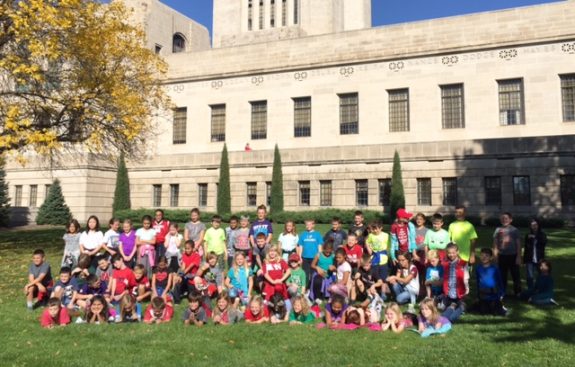 The open enrollment period for coverage under the Affordable Care Act runs November 1st to December 15th this year. You can find more information at healthcare.gov. To get enrollment assistance in the Bellevue area (or anywhere else in the state), check out Enroll Nebraska’s help page here.

This is the 18th year that Nebraska’s Official Veterans Day Parade will take place in Bellevue, and this year it will be held on November 11th. The parade begins at 10:00 am, and runs from the corner of Jackson Street on Mission Avenue to Washington Park on Franklin Street. This year’s Grand Marshall is Corporal Robert D Holts, an Omaha native and current Bellevue resident who served honorably with the Tuskegee Airmen from 1942-1946. I encourage you to bring the whole family to this wonderful event, and to join me in support of our community’s many veterans.

My office will be closed on November 10th in observance of Veterans Day, and on November 23rd-24th for Thanksgiving. I send my warmest wishes to all of you this fall.