I would like to highlight a few key phone numbers as flood survivors continue the transition to long-term recovery and we continue to support them:

This week we worked through a number of bills on Final Reading and sent them to the Governor’s desk.

One of the bills that was sent to the Governor was my LB 304, a “cottage foods” bill that would allow Nebraskans to sell foods already authorized for sale at farmers’ markets to customers from their homes, at certain events, or for order and delivery online or over the phone. This bill only pertains to foods that are not time/temperature controlled for safety, including foods such as baked goods, uncut fruits and vegetables, jams, jellies, and fresh or dried herbs. Hundreds of Nebraska families are already purchasing and safely consuming these locally produced products at farmers’ markets every year. This legislation makes cottage foods available throughout the year and provides access to local foods in communities that do not have farmers’ markets. It will help our local producers in both urban and rural communities to pursue entrepreneurship opportunities and supplement their incomes. The Governor signed the bill into law on Wednesday. I am grateful to Senator Ben Hansen for prioritizing this bill, and to the many constituents who have worked with us to advocate for this bill’s passage!

Another of my bills that passed on final reading was my LB 237. This bill restores a monthly commission to counties across the state for motor vehicle sales tax collections over a certain amount. LB237 addresses an under-funded mandate that the state has placed on counties to collect motor vehicle sales taxes. While the counties collect hundreds of millions in motor vehicle sales tax for the state each year, the collection process takes staff time and resources for which the counties are not currently being adequately reimbursed. Currently, each county receives only $900 for conducting this work. The bill reinstates a commission per dollar collected that was previously in place to provide counties with funding to help fund Treasurer staff who do this important work. This is part of my efforts to address unfunded mandates to counties, and supporting our counties is an important part of controlling property taxes.

As I discussed a few weeks ago, we have also been working on updates to our state’s Prescription Drug Monitoring Program (PDMP). Senator Sara Howard introduced and prioritized LB 556. LB 556 is a good bill that will help the PDMP fulfil its primary purpose of informing and protecting patients.

This week after a few grueling sessions the Revenue Committee passed an education funding/property tax relief bill. The bill adds to state revenue to increase education spending and bring down the proportion of education spending that comes from property taxes. The revenue gained comes from a ½ cent increase in sales taxes and the elimination of many sales tax exemptions. Although there were many compromises to get to this point, and likely more that will need to be done to get an education funding/property tax bill passed, LB 289 provides an important start for that conversation on the floor. The substantive language we will be discussing is found in AM 1572, which can be found here. Debate on the bill is scheduled to begin Tuesday afternoon. Two components of the bill do what I have long argued that needs to be done: 1) eliminating tax exemptions to broaden the tax base and make taxes more fair; and 2) increasing education funding to reduce our reliance on property taxes. Currently Nebraska ranks 47th in state spending on education. If LB 289 were to pass, then we would ranking in the 20’s in terms of state spending on education.

On April 30th the legislature voted to override the governor’s veto of Senator Myron Dorn’s sales tax bill, LB 472. LB 472 was introduced in response to the wrongful conviction of the “Beatrice Six” in Gage County and the $28.1 million dollars they were awarded by a federal judge in 2016. The “Beatrice Six” spent several years in prison for the death of 68-year-old Helen Wilson until DNA evidence exonerated them in 2008. Senator Dorn’s bill creates a funding mechanism to pay the damages by allowing a county board to pass a sales and use tax of 0.5 percent on transactions within the county, so that property taxes are not the only source of funds to make the payment. After it was initially passed on a vote of 43-6, the Governor vetoed the bill. Senator Dorn offered a motion to override that veto, which passed on a vote of 41-8 with thirty votes needed to pass the veto.

Senator Machaela Cavanaugh introduced, and Senator Robert Hilkeman prioritized LB 532. This critical bill clarifies the process to apply for a protection order in cases of harassment, sexual assault, and domestic abuse. These orders are often granted when people are at their most vulnerable and are a vital tool to keep Nebraskans safe. Senator Cavanaugh’s bill makes it clear what information must be included in an appilcation for a protection order, allows plaintiffs to re-file the complaint if it is initially dismissed, and requires an evidenciary hearing within 14 days if an order is rejected, so that the plaintiff has an opportunity to present additional informaiton. Recent tragic incidents in Nebraska, like the death of Janet Bohm and injury of her daughter Amanda, have made the need for these changes more clear than ever. Fittingly, the legislature advanced this bill on the last day of April, which was Sexual Assault Awareness Month.

We also discussed Senator Justin Wayne’s LB 492, an Urban Affairs Committee priority. The bill would adopt the Regional Metropolitan Transit Authority (RMTA) Act to give cities in Omaha’s vicinity the ability to create a joint RMTA. The authority would be governed by an elected board that represents all the member municipalities. This kind of board would be an important step for Belleuve and other cities in the Omaha metro area to combine resources and coordinate public transit options between municipalities. There have been several studies on the challenges of public transportation in Sarpy County. The option to join a RMTA would create one possible solution for Bellevue and other Sarpy cities to consider. We have not yet voted on LB 492, as it was held over for future discussion.

Wake Robin Elementary’s 4th graders visited their capitol on Monday April 29th. I was in a committee meeting and was unable to greet them, but my staff joined their tour and talked about how all of them can build the skills to be leaders. 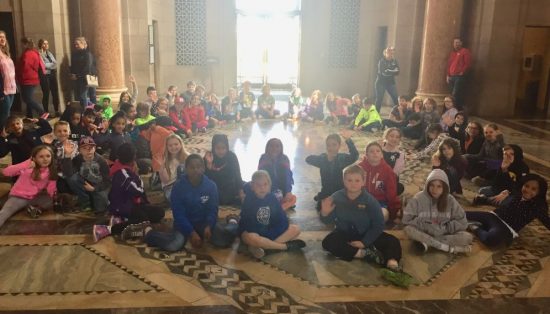 Each summer at the Nebraska State Capitol, the Office of the Clerk of the Nebraska Legislature coordinates the Unicameral Youth Legislature. High school students are invited to take on the role of state senators in the nation’s one and only unicameral by conducting committee hearings, sponsoring and debating bills and exploring the legislative process. Students who are interested in public office, government, politics, law, public policy, debate or public speaking are encouraged to consider this program, which will be held from June 9th to the 12th. The registration deadline is May 15th.

Registrants are encouraged to apply for a Greg Adams Civic Scholarship award, which covers the full cost of admission. Other $100 scholarships are also available. The University of Nebraska-Lincoln’s Extension 4-H Youth Development Office coordinates housing and recreational activities as part of the Big Red Summer Camps program. To learn more about the program, go to www.NebraskaLegislature.gov/uyl or call the Clerk of the Legislature’s office at (402) 471-2788.