One important note is that as of Friday, May 17, all the state and federal Disaster Recovery Centers (DRC) have closed. This includes the DRC in Bellevue. However, homeowners, renters and business owners in those counties designated for federal assistance still have until June 19 to register. If you have not yet begun the registration process, you can do so in the following ways:

I also want to again highlight important information from the Nebraska Voluntary Organizations Active in Disaster (NEVOAD). When cleaning up flood damage, it is critical to use the right kind of cleaning solution to avoid the growth of dangerous mold. A fungicide and wire brushes are needed to remove mold – bleach alone is NOT effective for mold remediation because it cannot clean below the surface of porous or semi-porous materials like wood. Fungicidal disinfectant can be obtained free of charge for flood clean up at:

Homeowners still in need of clean-up assistance can call the Crisis Clean Up Hotline at 833-556-2476. In addition, homeowners can find more information at: http://www.heartlandchurchnetwork.com/flood-relief.html

This week the Speaker announced his intention to adjourn the Legislature a week early, on May 31st. He feels that date will give us enough time to address our remaining priority bills. While the Legislature is constitutionally limited to meeting no more than 90 days in odd-numbered years (this year that would have been June 6th), there is no set minimum number of days.

This week we debated several key bills on General File first-round debate. Those include:

LB 720, introduced and prioritized by Senator Mark Kolterman, would create the ImagiNE Nebraska Act. LB 720 would replace the Advantage Act, which is Nebraska’s primary business incentive program. I have worked closely with Senator Kolterman since he introduced LB 720 to address what I saw as the more concerning parts of the proposal, and am supportive of the bill. LB 720 likely has enough votes to advance, but will need to be rescheduled for further debate in the coming week before we take a vote.

Senator Anna Wishart’s priority bill this year is LB 110. The bill would legalize certain forms of medical cannabis in Nebraska. After numerous discussions with Senator Wishart spanning all of last interim, I felt comfortable enough with her proposal to support it. I believe this proposal strikes the right balance of safety and access for those who are desperately ill and could benefit from trying a medical cannabis prescription. We had three hours of debate on the bill this week, but are unlikely to have enough support among other senators to reach the point that we can vote on it.

On Thursday May 16th the Revenue Committee voted to advance LB 153, Senator Tom Brewer’s military retirement exemption bill, to the full legislature. I believe it will be next year before it moves further because it requires funding and the budget has been set for this year already.

My colleagues and I are also engaging in ongoing discussions and negotiations about property tax relief proposals. At the beginning of this session several senators, including me, had bills to raise revenue that would be directed to increased school funding. That would allow school districts to reduce their levies and lower property taxes. The bill that the Revenue Committee Chair favored for discussion was LB 289, so that proposal dominated much of the discussion over the session. That bill includes provisions of concern to larger and growing schools (like OPS and those in Sarpy county). At this point it looks like the most likely proposal to emerge this year will be one that eliminates several sales tax exemptions, increases the Earned Income Tax Credit to reduce the impact of higher sales taxes on low-income families, and puts the funds in the Property Tax Credit Fund with a provision that the Fund goes away when the state steps up and increases school funding by 125%. The idea is to work on the revenue side this year and revisit the school funding distribution next year.

The Sarpy County Chamber of Commerce hosted its last Legislative Coffee for this session on Friday May 17th. 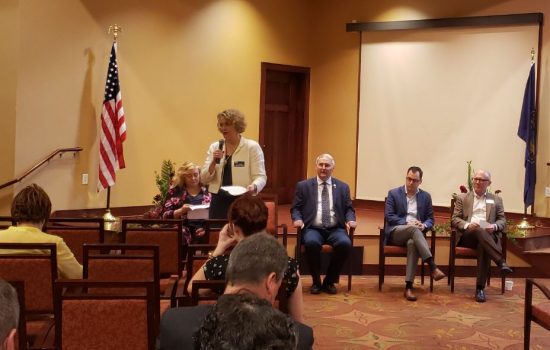 I was joined by (L-R) Senators Carol Blood, Robert Clements, Andrew La Grone, and John Arch to talk about our priority bills, the policies we’ve debated so far this session, and what we anticipate will occur in the coming days as this session winds down.