This week Governor Pete Ricketts announced the release of a consolidated guide for Nebraskans in need of disaster relief resources. The guide was created as a reference for Nebraskans to utilize as a resource based on the state’s experience following historic flooding that devastated many areas of the state in March. The guide provides resource summaries, hotlines, and other contact information for more than two dozen community organizations as well as state and federal agencies involved in recovery assistance. It is available by clicking here.

Printed booklets may also be requested by sending an email to nema.jic@nebraska.gov or by calling (402) 471-7421.

Memorial day is Monday May 27th. This event is an opportunity to remember and honor those who gave their lives in service to their country; and to thank those servicemembers and veterans who are still with us. The Bellevue community is particularly attuned to the sacrifices required by military service, as so many of our community members are serving or have served. This year there will be a number of Memorial Day events in Bellevue. Those open to the public include:

The Eastern Nebraska Veterans Home ceremony begins at 10:00 am. A “Ringing of the Bell” will honor residents of the home who died during the past year and an ensemble will perform patriotic music.

Veterans of Foreign Wars Post 10785 will host a ceremony at 11:00 am at the Bellevue Cemetery, located on the north end of Franklin Street at East 13th Avenue. The ceremony will include a presentation of wreaths to veterans and their family members and a performance by the Sarpy Serenaders.

Veterans of Foreign Wars Post 2280 will host another ceremony at Washington Park at 3:00 pm. It will include a reading of General John A Logan’s Memorial Day order dating from the conclusion of the Civil War, a rifle volley, and the playing of taps.

My office, along with other state and federal offices, will be closed on Monday to observe the holiday.

Coming into the session one of the top priorities of most senators was property tax reform. Nebraska ranks very high comparatively on property taxes. Two major proposals for property tax relief were heard, but neither made it across the finish line this year. One of those, LB 289, was an ambitious bill to reform school funding, eliminate sales tax exemptions, and increase sales taxes in a bid to reduce property taxes. A “plan B” for property tax reduction was also discussed: an amendment to LB 183 that eliminated those same sales tax exemptions and pushed the money temporarily to the Property Tax Credit Fund. The intent was for that money to be used for structural educational funding reform in a future year. Overall I support the broad aims of both bills to increase education funding and reduce sales tax exemptions. I am hoping that we can continue to work on these issues over the interim and come back next year with a proposal that can command broad support.

Another major revenue project for the session has been a revision of our major business incentive program (currently the Nebraska Advantage Act). I have been impressed with the work that has been done on a new proposal (LB 720, the ImagiNE Nebraska Act) to improve transparency and reporting, improve the partnership with local governments, and to impose fiscal guardrails on the program. Some of these improvements came out of the work of the sponsor, Senator Mark Kolterman, and the Revenue Committee; some additional improvements have happened just this week. We spent nine hours this week debating the ImagiNE Act, but it ultimately died for this year on Friday when there were only 30 of the 33 votes required for cloture.

Chaplain of the Day

Each year, senators may invite pastors from their districts to visit the Capitol and serve as the chaplain of the day, delivering a morning prayer before debate begins. 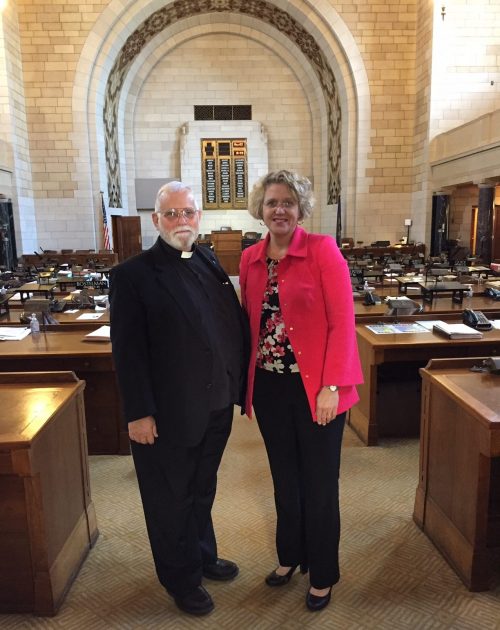 On Wednesday, we welcomed Rev. Tom Jones from Bellevue’s Church of the Holy Spirit to the Capitol building. After delivering his prayer, Rev. Jones got to join a rowdy bunch of 4th graders for a building tour, which is always fun. I am so glad that Rev. Jones was able to visit us in Lincoln.

The Revenue Committee advanced LB 288 as a committee priority earlier this year as part of our broader discussions about tax reform in the state. The bill addresses an issue created by the federal tax cut of 2017. In our Revenue Committee discussions, we committed to creating a fiscally sustainable proposal that included military retirement tax relief. The final committee amendment, however, did not contain that military tax component nor one of the  pay-for pieces we had discussed. I think it is very important that we accomplish military tax retirement relief, and Chair Lou Ann Linehan of the Revenue Committee has agreed to hold LB 288 over the interim to work on how we can incorporate both the income tax fixes and the military retirement exemption in a responsible way.

LB 481, originally introduced by Senator Kate Bolz and selected by Speaker Scheer as his personal priority, would establish a trust fund for brain injury research and advocacy in Nebraska. The bill advanced from first round debate with an amendment this week. Under the amendment, the Brain Injury Trust Fund would be administered by the University of Nebraska Medical Center. A 12-member Brain Injury Oversight Committee that would develop criteria for expenditures from the trust fund, provide financial oversight and direction to UNMC to manage the trust fund, and represent the interests of individuals with brain injuries and their families. I am glad that we were able to pass this legislation for the 36,000 Nebraskans living with brain injuries and their families, many of whom shared their personal stories with me.

The legislature has been working on LB512 (which has been amended to include Senator Erdman’s LB482). The proposal would require county equalization boards to prorate the property values of homes destroyed by a natural disaster (such as flooding) for property tax purposes. Essentially, the valuation of a home destroyed by flooding would reflect only those days when the home was intact and still livable. This bill has an emergency clause attached and will go into effect as soon as the governor signs it in the next few days (check to make sure this happens). The counties will be responsible for putting out information about how the disaster reassessment will work. You can find the Sarpy County Assessor’s website here.

LB 436 was introduced by Senator Matt Hansen and prioritized by the Legislature’s Planning Committee. The bill will allow the Nebraska State Data Center program to form a commission that will help ensure the 2020 census reaches as many Nebraskans as possible. Having an accurate count of Nebraska residents is vitally important and this bill will enhance our state’s ability to successfully carry out the census.

Senator Mike Groene introduced LB 147. As Chair of the Education Committee, he designated the bill a committee priority; however, the bill did not have enough votes to advance from that committee to the full Legislature. This week Senator Groene made a motion to pull the bill from committee by a vote of the full Legislature instead. I have always voted against “pull motions” on principle because they override the work of a standing committee in the legislature. I did not make an exception for LB 147. The motion did pass, but since we have reached the end of session we will not debate the bill this year. Senator Patty Pansing Brooks is sponsoring an interim study to try to address some of the issues that current opponents in the committee still have with LB 147. Hopefully this study will help the body come to an agreement that allows a well-crafted intervention bill to be discussed next session.