On the 18th and 19th this month I joined a group of women legislators in San Antonio for the National Foundation of Women Legislators (NFWL) Conference. The conference covered various policy topics such as drug prices, elder abuse, and insurance reform. On the first night I was honored to represent Nebraska as a winner of their national “Women of Excellence” award. 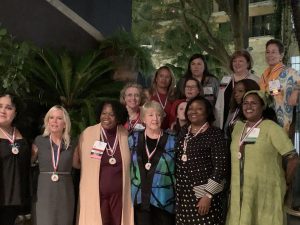 This month I attended a community outreach event hosted by the Metro-Area Planning Agency. I was joined by county board members, mayors, town councils and other officials to discuss current and future MAPA projects in the region.

On November 4th I sat on a panel to discuss dark money with the Osher Lifelong Learning Institute (OLLI). The panel was also sponsored by the League of Women Voters and Common Cause. Other panelists included former senators Al Davis, Jerry Johnson and Joe Jordon. This was a great opportunity to discuss current challenges with campaign financing and how the Unicameral could change Nebraska’s campaign finance laws through policies such as LB 210, that I introduced last year. LB 210 requires that spending on “electioneering” be reported like spending on other election advertisements. Electioneering communications target a campaign or ballot issue near an election, but fail to specifically say “vote for” or “vote against” a candidate and so they fall into a loophole that does not require disclosure of spending. LB 210 would require that spending on these electioneering communications be reported. After being heard in the 2019 legislative session, LB 210 is currently in the Government, Military, & Veterans Affairs Committee.  It would require the support of the majority of the committee’s 8 members to be sent to the floor for debate and a vote by the full body.  The bill does not appear to have enough support to get out of committee at this time.

Each year the Sarpy County Attorney and Sarpy County Teen Court hold a Law Academy for junior high and high school students in the Omaha, Papillion, Bellevue, and Millard areas. These students, who are often interested in public service careers and want to learn more about government, heard from a variety of speakers over four sessions. Speakers included judges, military officers, public officials and lawyers. I spoke to the group on November 5th about the Legislature and my role in the legal process. The students were great listeners and I was happy to be able to help them understand some of the intricacies of our Unicameral system.

I enjoyed being a part of the Veterans Day Parade in Bellevue on November 9th. As always, it was a great success! The parade is in its 19th year and provides an opportunity for generations of Nebraska families to celebrate and honor those who have served. Many thanks to the Bellevue Chamber for putting together such a wonderful event. 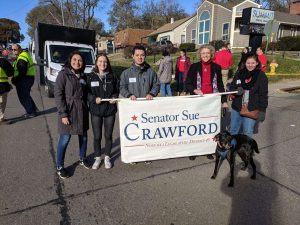 Throughout the fall Senator Cavanaugh and I have been meeting with business leaders across the state to talk about Paid Family and Medical Leave. This month we traveled out to Kearney to meet with a group of small business owners to hear their views on how we can move forward in ways to increase worker access to paid family and medical leave.

On November 14th, the Nebraska State Education Association held its annual metro-area legislative dinner. The dinner gives senators and teachers the chance to meet and discuss what policy issues are impactful to them. I was glad to get the chance to sit with teachers from Bellevue and Omaha Public Schools and hear about their experiences and their perspectives. One of the teachers at my table had spent some time in Oklahoma and warned us of the challenges that charter schools there had posed to her public school classroom in terms of higher class room sizes and dealing with students who had been dismissed from the charter school and returned to the public school. We also discussed the challenge of safety for those students who walk to Wake Robin Elementary School. As part of the program that night we all filled out forms identifying areas of future improvement for schools in our area. I appreciate all that our teachers do inside and outside the classroom for our kids.

On the 21st and 22nd, several of my colleagues and I met in Nebraska City for the annual Legislative Council meeting. This gathering provides an opportunity for senators to discuss their priorities, policy ideas and expectations for the next session in a casual setting. It is like a pre-session retreat. We discussed the logistics of the first several days of session and heard updates about Health and Human Services from Senator Sara Howard, Corrections from Senator Steve Lathrop, and the aftermath of the flooding from Bryan Tuma (Deputy Director of NEMA). We also had discussions about property tax reform and the budget. In the interim, our schedules differ greatly from one another, so it’s beneficial to have this time to catch up with one another and get ready for the upcoming session.

Next month, all state offices, including mine, will be closed on Wednesday, December 25th so that employees can spend time with their families. Warm wishes to you and yours this holiday season!