I was happy to attend the Supporting Survivors Luncheon this week, hosted by Senator Robert Hilkemann, Survivors Rising, the Women’s Fund of Omaha, and the Coalition for a Strong Nebraska. This was a great opportunity to show our support of survivors of trafficking, sexual assault and domestic violence and encourge their continued advocacy in the Legislature.

This week I introduced one more bill for a total of 10, not including carryover bills. LB 1061, introduced Tuesday, is about the alternative response program and non-court cases within the child welfare system. Over half of our child welfare cases in Nebraska are now non-court involved cases. LB 1061 would set statutory parameters for those cases to ensure that children are safe. You can see the full list of my bills for this biennium here. If you would like more information on any of these proposals please contact my office.

This week marked the end of bill introduction and the start of public hearings on legislation. Two of my bills, LB 871 and LB 841, were presented this week in the Judiciary and Revenue committees respectively. LB 871 creates a mechanism for the Attorney General to take action against companies suspected of engaging in unfair pricing. LB 841 would allow permanently disabled veterans to verify their disability status just once, instead of having to verify their disability status on an ongoing basis. 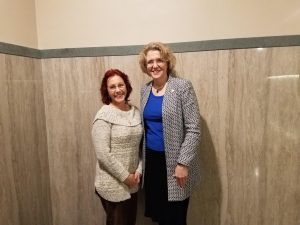 I am grateful to Barbara Bolter for bringing this issue to my attention and testifying at the hearing for LB 841.

LB 983 eliminates the current provision that one point be issued against a driver’s license for any speeding violation up to five miles per hour. The hearing on LB 983 is on Monday before the Revenue committee.

LB 842 relates to motor vehicle taxes imposed on military service members. This bill provides that active duty members of the armed forces who are Nebraska residents, as well as their spouses, can qualify for a motor vehicle tax exemption.

LB 870 is a bill that allows cities to directly borrow funds from a bank to supply infrastructure and services following a natural disaster such as a flood. With this in place, communities impacted by natural disasters can quickly obtain the funding they need to provide essential resources like water to their residents. This bill will be heard by the Urban Affairs committee next Tuesday.

LB 1061 makes a number of changes to Nebraska’s Child Protection and Family Safety Act which will protect and provide greater clarity for parents, children and caregivers involved in Nebraska’s child welfare system. Several of these changes to alternative response include clearer definitions of response pathways for reports of child abuse and neglect and the establishment of an advisory group under the Nebraska Children’s Commission. Changes to non-court involved cases include the requirement for a temporary delegation of parental authority when a child is placed out of the home and notification of rights for the parent and/or caregiver. LB 1061 will be heard by the Health and Human Services committee next Friday.

The schedule for bill hearings can be found here. If you have any interest in testifying at a public hearing, please contact me or my staff at 402-471-2615.

State of the Judiciary Address

On Wednesday, Chief Justice Mike Heavican delivered the annual State of the Judiciary Address to the body. He discussed the Supreme Court’s Language Access Program, child welfare in the courts and the expansion of services and programing within the Judicial Branch despite challenges like the flooding last spring. I was especially glad to hear about the outreach programs across our state that work to improve the juvenile court system and hope to see those programs expand and improve once again this year.

Early this week I joined the Nebraska Volunteer Firefighters Association for their annual breakfast for elected officials. The breakfast is always well-attended and offers a chance to show our appreciation for these volunteers.

In August, members of the Health and Human Services Committee learned of improper living conditions and problems caused by understaffing at the Youth Rehabilitation and Treatment Centers (YRTCs) in Geneva and Kearney. These centers serve youth ages fourteen to nineteen in the state’s juvenile justice system and are under the jurisdiction of the Department of Health and Human Services. The HHS Committee held public hearings, tours of the facilities and interviews with stakeholders over the interim to determine how to best approach the problem. On Wednesday, Senator Howard held a briefing about the Committee’s recommendations and the six bills they will introduce this session in response to the situation. I am hopeful that these pieces of legislation will improve the environment of the YRTCs and create a supportive framework for the treatment programs they provide.

On Thursday I attended the Nebraska Conservation Roundtable Breakfast. The Nebraska Conservation Roundtable serves as a resource for Senators in the Legislature as they approach sustainability issues in our state. At the breakfast we discussed the impact of climate change on agriculture and possible agricultural legislative changes to address climate change such as support for ground cover crops.