On Monday morning I attended the AFL-CIO annual Legislative Breakfast. The breakfast was held in conjunction with their annual Legislative Conference. Union members from throughout the state met in Lincoln to visit with Senators and their constituents. Members also had the chance to listen to floor debate Monday morning and hear several of my colleagues speak about relevant bills in the Warner Chamber. 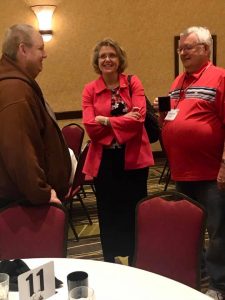 Bills on the Floor

We debated several bills on the floor this week. A couple of notable ones include a bill that allows college athletes to earn money, LB 962 (the Nebraska Fair Pay to Play Act) which passed the first round. Another lengthy debate occurred on a bill to ban vaping in public spaces, LB 840. This bill also passed the first round.

Behind the scenes I spent considerable time this week in meetings with the Department of Health and Human Services, child advocates and County Attorneys working out a compromise on the language in LB 1061. The County Attorneys opposed the bill on its first round and I agreed to meet with them and other stakeholders between the first and second round. I am happy to report that by Thursday morning we reached an agreement so we will be set to push the bill successfully through the next round.

Thursday was Nebraska Nurses Day at the Capitol. Nurses from all over the state visited the Unicameral and discussed important issues with their representatives. One of the highlights of the day was learning about Nebraska’s nurse practitioners. There are currently 2,000 licensed nurse practitioners in Nebraska and 1.06 billion visits to nurse practitioners annually for health care needs. I am grateful to these hardworking people for keeping our state healthy and safe.

LB 870 advanced to the Enrollment & Review stage on Wednesday. LB 870, introduced by me and prioritized by Senator Rob Clements, would allow cities and municipalities to borrow directly from banks in the event of a natural disaster. LB 870 is an important bill this session given the hardship many Nebraskans faced last year in the spring with flooding.

The Housing Foundation for Sarpy County put on a wonderful fundraising event this week to benefit the Bellevue Housing Agency. Cleverly named Bags & Swag, the night includes a silent auction with handbags and musical entertainment. I have attended this event for the past several years and it never disappoints. Thank you to the Housing Foundation for Sarpy County for your dedication to maintaining and supporting the Bellevue Housing Agency.

This Tuesday marked the halfway point of this 60-day session and Thursday marked my last afternoon of public hearings in office. I am looking forward to next week when we will begin full-day floor debate. Toward the middle of March the Speaker will start scheduling late nights, where we debate later into the evening instead of adjourning at 5:00. Senators are eager to have their priorities heard, so it will be an interesting and busy next 30 session days!