Good morning, my name is Sen. Steve Erdman, and today I introduced a bill to end the Learning Community.

The LC’s mission is to “measurably improve educational outcomes.” But, after being in operation for more than 10 years the LC has failed to provide the public with concrete and objective measurable evidence of student success. Contrary to the opinion of David Patton, the LC’s CEO, who recently told the Omaha World Herald that “the data is crystal clear,” closer examination of the evidence shows that the sample sizes of their data were too small to be meaningful and their improvements were so slight that no reasonable person could counted them as any kind of significant improvement. Moreover, they cite as measurable results things which are either too vague or too impossible to measure, such as providing “emotional support” to students and families. When it comes to early childhood education, recent and past studies show that early childhood education programs do not accelerate the learning process at all. For instance, a 2012 article written by Andrea Mrozek concluded that what pre-K children need most is “playing in an environment of adult attachment.” In other words, pre-K children learn best at home under the nurturing care of their own parents, not by an adult stranger in an educational institution.

Perhaps, the most egregious example of how the Learning Community has lost sight of its original purpose came last year when the LC board members approved the setting up of a non-profit, private foundation. The foundation has no defined purpose, no regular members, and its directors are not elected by the public. Their meetings are not open to the public, nor do they require a public notice, nor do they even require an agenda. The foundation does not adhere to open meetings laws or public records laws, nor has anyone disclosed how they intend to spend the foundation’s money. It is wrong for Nebraskans to be funding a secretive foundation with no public accountability whatsoever.

The LC has also engaged in egregious spending. The General Fund expenditures of the LC are projected to increase 16% this year while its capital projects are expected to rise by another 6%. The LC’s operating budget is projected to rise to $8.9 million, which is a 6% hike from last year. The LC is levying the maximum amount allowable by State law. In order to help you see how they waste taxpayer dollars consider the way they cater meals for some of their adult learning programs. While their kitchen sat unused on June 14, 2018, the LC catered meals from Shields Catering Service for $2,300 and from African Cuisine Catering for an additional $970. Total cost for the catered meals that day was $3,270.

Many of the LC’s programs undermine our free-market economy as well as our charity work. For instance, after the LC gave monies to One World to start a free daycare center, those private day care centers which were already operating in the community, such as the Safe Haven Daycare Center in north Omaha, were driven out of business. Moreover, after One World began teaching English as a Second Language to Spanish only speakers, the charity programs which had been teaching English as a second language to speakers of all languages, such as the program provided by the Literacy Center of the Midlands, suddenly fell by the wayside and closed its doors. Meanwhile, non-Spanish speakers were left with fewer place to go to learn English.

The LC is out of control and needs to be stopped immediately. The bill I introduced today is the longest bill I have ever introduced. The bill is 143 pages long. The reason the bill is so long is because the LC has expanded its tentacles into so many different areas of life in the greater Omaha metropolitan community without ample justification for doing so. Instead of focusing on its original purpose, the LC has devolved into an institution in search of a mission. If there is to be a Learning Community in the future, let it be run by parents in the Omaha Public School District or by a privately funded organization. 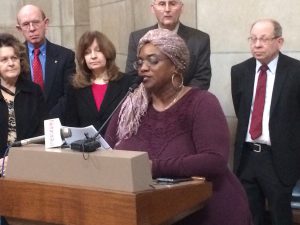