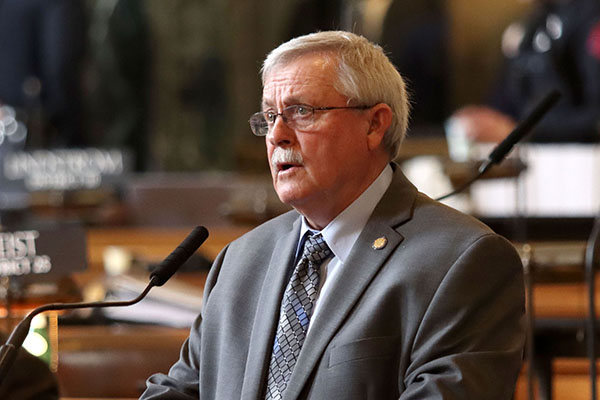 The first week of the 2020 Legislative Session is already in the books. Senators have only the first ten days of the session to introduce new bills. Some very important bills have already been introduced by others Senators. So, today I would like to tell you about a carry-over bill from last year that I will continue to support, two bills from the first week that I have already co-signed, and three bills I plan to oppose.

On Monday January 13 the Legislature will debate LB 153 on the floor of the Legislature. LB 153 is a carry-over bill from last year that would exempt fifty percent of retired military pay from the Nebraska State Income Tax. Sen. Tom Brewer of Gordon introduced this bill on behalf of Governor Ricketts, and the bill already has bi-partisan support. I will support this bill because I believe we need to take care of our retired military personnel.

The most important new bill introduced by another Senator last week was LB 814 by Suzanne Geist of Lincoln. This bill prohibits the dismemberment of a baby during an abortion by using clamps, forceps, tongs, scissors or other similar instruments. It does not, however, prohibit the use of suction to dismember a fetus. Because I am a pro-life Senator, I co-signed this bill and stood with Sen. Geist at her press conference last Wednesday when she introduced this bill. Gov. Ricketts has also issued a proclamation to declare January 22 as a day to pray to end abortion in our state.

Another bill that I have already co-signed is LB 770 by Sen. Tim Gragert of Creighton. This bill provides free access to our state parks by our disabled veterans. Those veterans who have been honorably or generally discharged and who have suffered a fifty percent or more disability during their time of service would qualify for this special permit. This is something we can do to honor and support our disabled veterans.

Now, the first bill I will oppose is LB 754 by Sen. Carol Blood of Bellevue. This bill allows individuals to change the sex on their birth certificate. I am against these kinds of bills which advance the sexual orientation and gender identity movement. Already, we have seen how sexual orientation and gender identity is destroying women’s sports by allowing boys to compete as girls. Legislators in three states, Georgia, Tennessee, and Washington, are introducing bills this year to use the sex on a person’s birth certificate to determine their participation in high school sports. Blood’s bill would effectively eliminate this kind of practice from ever being used by high schools in Nebraska.

The second bill that I will oppose from the first week of the Legislative session is LB 873 by Sen. Hunt of Omaha. This bill is somewhat similar to LB 812; however, this bill allows individuals to choose a new category called “Non” as their sexual identification on their birth certificate, driver’s license, or state identification card. By loading up the docket with these kinds of extremist pieces of legislation, these social activist Senators hope they will be able to sneak one through the Legislature someday.

The third bill that I will oppose is LB 816 by Sen. McCollister of Omaha. This bill adds semi-automatic rifles and shotguns to the list of those firearms heavily regulated by the state. The bill would limit the transfer of semi-automatic rifles and shotguns for a valid public purpose only. If this bill were ever to become law in Nebraska, you would be able kiss all recreational shooting, hunting, and competitive shooting with these kinds of weapons good-bye.

More bills will be introduced next week, including some that I will introduce. However, I hope this short summary gives you some perspective on what kind of Legislative session this year is turning out to be.