My highest priority in the Nebraska Legislature is to reduce property taxes. For this very reason I introduced LR3CA in January, which is a Legislative Resolution to put a measure on the 2020 ballot, which allows the registered voters of the State to vote on a constitutional amendment for receiving 35 percent of their property tax bill back every year in the form of a credit or refund on their Nebraska State Income Tax Return. This measure has been appropriately nicknamed “The 35 Percent Solution”.

LR3CA is going nowhere. Because LR3CA remains stuck in the Legislature’s Revenue Committee, it won’t become law this year. I anticipated that this would happen, because it has happened every year that I have introduced a bill or a resolution for significant property tax relief. The bottom line is that the Legislature lacks the intestinal fortitude to grant the property owners of our State the significant property tax relief they so desperately need. Therefore, we will have to do it another way.

There is hope for the future. Because I anticipated that LR3CA would die in committee, last year I began working with a group of concerned citizens to launch a petition drive to put the same measure on the 2020 ballot. Ballot initiatives of this kind allow the citizens of Nebraska to act as the second House of the State Legislature. When Senators in the Nebraska State Legislature fail to listen to their own constituency and to take appropriate action, it becomes incumbent upon the citizens of our State to take their concerns into their own hands and to act.

Nebraska’s high property taxes have reached the level of a crisis. As Sen. Tom Brewer, who represents Legislative District 43 in the Unicameral, recently said, “When a tax reaches the point it causes people to move, it is no longer just a tax. It is no longer just a ‘problem’. It’s a crisis and it’s immoral.” The property tax crisis we face in our state is now comparable to the burden that our Founding Fathers faced under the tyrannical rule of King George III of Great Britain when he put a tax on their cup of tea. 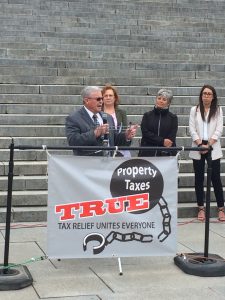