The content of these pages is developed and maintained by, and is the sole responsibility of, the individual senator's office and may not reflect the views of the Nebraska Legislature. Questions and comments about the content should be directed to the senator's office at jarch@leg.ne.gov

Thank you for visiting my website. It is an honor to represent the people of the 14th legislative district in the Nebraska Unicameral Legislature.

You’ll find my contact information on the right side of this page, as well as a list of the bills I’ve introduced this session and the committees on which I serve. Please feel free to contact me and my staff about proposed legislation or any other issues you would like to address. 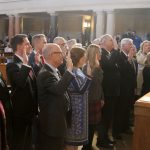 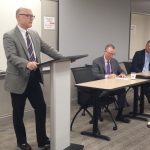 Keynote speaker at a meeting of the Nebraska Chamber of Commerce 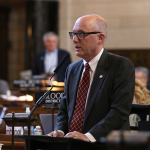 Speaking on the legislative floor 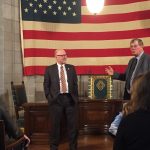 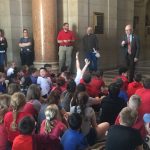 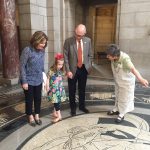 Touring the State Capitol building with my wife, Brenda and granddaughter Brooklyn

Posted in Uncategorized
End of Session
May 31st, 2019

The long session of the One-Hundred and Sixth Legislature has come to an end and to say that my first session was a learning experience would be an understatement. Of course learning about the various issues that come before the Legislature is of paramount importance – even what initially appears as the simplest of matters is complex when appropriately scrutinized. But the learning doesn’t stop there. One must learn to master the parliamentary rules of procedure, to build diverse relationships, to know exactly when to speak and when to listen, and learn to work tirelessly to reach a compromise.

Unfortunately, the Legislature was unable to achieve this last point on two major issues – property tax relief and business incentives. Without a doubt, high property taxes, and taxes in general, are a major concern for a majority of Nebraskans. Our over-reliance on property taxes to fund local governments, particularly schools, was a discussion that dominated the session. Two different proposals came before the legislative body, LB 289 and LB 183, but neither could overcome opposition from several different fronts – including the Governor, school districts, people in the service industry and everyday consumers. Both measures included provisions that would raise several taxes and impose a sales tax on many services currently exempt. In the end, any property tax relief would have been mitigated by the large shift to sales taxes.

My philosophy is the only way to reduce Nebraska’s tax burden, particularly the property tax burden, is to grow our overall tax base. The best way to do this is to attract new jobs and new workers to our state. While many view business incentives as a giveaway of government resources, the fact of the matter is we are competing with the rest of the country for the businesses that attract a vibrant workforce. Our current business incentive program, which expires next year, is not without flaws and a measure considered this year sought to remedy those problems. LB 720, the ImagiNE Act, would have replaced the current incentive program with one that is more transparent, easier for businesses to navigate, capped on cost and geared towards better paying jobs. Yet, the inability to compromise on a tax package ultimately derailed LB 720. There is still time to adopt a new incentive program next session, but failure to have such a program in place signals that Nebraska is not open for business. That means fewer jobs and fewer people to pay for essential government services.

Of course many Nebraskans are of the opinion, myself included, that essential government services need to be better defined and that perhaps there are areas where spending cuts could be made. Having said that, however, the Legislature did pass a considerably lean budget this year in which potential cuts were not obvious. The two-year budget package allows for an annual increase in state spending of a modest 2.9%. Most of that increase can be attributed to obligations such as aid to education and Medicaid, including the Medicaid expansion approved by voters.

During the legislative interim, I will continue to study the issues that are important to my constituents and that benefit the state of Nebraska. I believe serving in the Legislature will be an on-going learning process and I am very thankful I have been given this unique opportunity. I look forward to the next legislative session

High school students are invited to take on the role of state senators at the Unicameral Youth Legislature June 9-12. At the State Capitol, student senators will sponsor bills, conduct committee hearings, debate legislation and discover the unique process of the nation’s only unicameral.

The Unicameral Youth Legislature gives behind-the-scenes access to students who have an interest in public office, government, politics, law, public policy, debate or public speaking. Students will learn about the inner workings of the Legislature directly from senators and staff.

“This is an excellent opportunity to learn about our democratic system of government in Nebraska,” according to Senator John Arch. “By taking part in this program, students can experience the challenges and opportunities granted to our elected officials.”

Registrants are encouraged to apply for a Greg Adams Civic Scholarship award, which covers the full cost of admission. Applicants must submit a short essay. Other $100 scholarships are also available.

The Office of the Clerk of the Nebraska Legislature coordinates the Unicameral Youth Legislature. The University of Nebraska-Lincoln’s Extension 4-H Youth Development Office coordinates housing and recreational activities as part of the Big Red Summer Camps program.

To learn more about the program, go to www.NebraskaLegislature.gov/uyl or call (402) 471-2788. The deadline for registration is May 15.

The 2019 legislative session got underway on January 9th with the swearing in of thirteen new senators – myself included. I am honored and excited to have the unique opportunity to work with individuals from all areas of Nebraska in crafting the policy that helps shape this great state.

Part of the role of a state senator is to serve on the various committees having jurisdiction over certain subject matters. The Nebraska Legislature has fourteen standing committees: Agriculture; Appropriations; Banking Commerce and Insurance; Business and Labor; Education; General Affairs; Government, Military and Veterans Affairs; Health and Human Services; Judiciary; Natural Resources; Nebraska Retirement Systems; Revenue; Transportation and Telecommunications; and Urban Affairs. I have been assigned to serve on the General Affairs and Urban Affairs committees, as well as the Health and Human Services Committee. I am particularly eager to work on the Health Committee given my 30 years experience in health-care administration, including my former position as CEO of Boys Town National Research Hospital. My colleagues on that committee have elected me to serve as their vice chairperson.

I know there are many daunting issues facing the state, but I embrace the challenge. I look forward to fostering public policy that strengthens our economy so that we can lower the state’s tax burden, fund essential services, invest in the future and ensure all Nebraskans have the opportunity to live a prosperous life.