The content of these pages is developed and maintained by, and is the sole responsibility of, the individual senator's office and may not reflect the views of the Nebraska Legislature. Questions and comments about the content should be directed to the senator's office at mcavanaugh@leg.ne.gov

Thank you for visiting my website. It is an honor to represent the people of the 6th legislative district in the Nebraska Unicameral Legislature.

You’ll find my contact information on the right side of this page, as well as a list of the bills I’ve introduced this session and the committees on which I serve. Please feel free to contact me and my staff about proposed legislation or any other issues you would like to address.

Posted in Welcome
No funding for Children with Disabilities Again this Year
May 25th, 2021

Press Conference No Funding for Children with Disabilities Again This Year

Last week, a small group of legislators killed LB 376, a bill I introduced to create a Medicaid waiver, called a Family Support Waiver, to support children with Developmental Disabilities.  The bill would reduce the number of individuals on the A&D waiting list for developmental disability services that now has over 3,000 people.  Wait time is 6-8 years on average and is radically growing.  Because of the long-term critical underfunding and a service model that has not been updated for decades, Nebraska families with disabled children have struggled greatly.

The Family Support Waiver could make would help families provide care at home with services designed to help the disabled child develop to their fullest potential. For some, that would eventually mean being able to live independently. This is already a federal program available for state participation that includes a federal matching amount. I had worked with Senator Stinner to limit the fiscal impact of the bill and identify the funding in this year’s budget. The senators who filibustered the bill ignored the fact that the money is available and Appropriations Chairman Stinner had agreed.

This fight has brought a lot of light to the issue and has solidified my resolve. I will continue to fight for these kids and families who desperately need our help.  The link above is a press release the ARC of Nebraska will be releasing. To continue to bring light to the people who need this funding, they are hosting a press conference on Thursday at 11 a.m. Please clink the link to learn more.

Newly proposed regulation changes relating to childcare centers and certain schools or school programs has garnered a lot of comments.   These proposed administrative regulations are in response to FEDERAL law and not as a result of any bill passed by the Nebraska Legislature. The federal Child Care and Development Block Grant (CCDBG) Act of 2014 requires DHHS to develop a state plan that includes group size limits for specific age populations, as determined by the State.  The group size limit is in addition to provider-to-child ratios. The federal law requires A PLAN but does not require certain ratio or size limits. The state can alter those limits in their state plan.

A public hearing on these proposed regulations was held on May 19th.  My staff attended the hearing and I’ve been in contact with local representatives from some of the affected programs.  While the deadline for public comment has passed, the department has indicated because of the large amount of feedback, it will continue to take comments but has asked that those comments are submitted ASAP.  Any comments should be sent to:  DHHS.Regulations@nebraska.gov.

Also, there will be another public hearing on this matter and another opportunity for parents and providers to weigh in on the proposed regulations.

Please let me know if you have any questions.

I’ve designated Legislative Resolution 29 as my priority for this year. LR 29 will create the Eastern Service Area Child Welfare Contract Special Investigative and Oversight Committee of the Legislature.

The standing committee, Health and Human Services, will work collaboratively with the LR 29 Committee in studying the child welfare contract, the RFP (Request for Proposal) process and contract decision making process. The committees will also study the Department of Health and Human Services and the Department of Administrative Services with respect to the award, implementation, and oversight of the contract. Findings and recommendations will be issued no later than December 1, 2021.

With allegations of financial mismanagement and poor performance of the current contractor, I felt this was of utmost importance. Taking care of these vulnerable children IS of utmost importance. The contractor, Saint Francis Ministries, has commented to the Health and Human Services Committee, that their original application and bid for the $147 Million services contract was fraudulent. The latest CEO of that company used that very word in their report. So, why should the State of Nebraska continue to throw money at the contract in hopes of improving performance? In addition to the original amount, HHS issued an “emergency” contract with an additional amount that makes their payments even higher. Why? Because until other plans can be made and implemented to take care of the 2500 children involved, there is no one else to do it. The decades-long experiment in Nebraska with child welfare privatization has proven over and over that the process is fraught with problems.

Children in the eastern service area deserve better. Let’s see if we can get to the root of the problem.

A related bill is LB 428. Section 2 of AM 566 requires the Legislature to complete an evaluation of the “pilot program” of privatization of child welfare case management services in the Eastern Service Area by December 31, 2021. The bill would authorize the Legislature to hire a consultant to assist in completing the evaluation. LB 428 is currently on Select File, or the second round of debate. It is a Health and Human Services Committee bill that is very likely to pass.

Senator Machaela Cavanaugh introduced a bill in Appropriation Committee on February 24, 2021 to appropriate $17 million to the DD wait list.  This would not provide services to all the persons on the wait list but it would for an approximate 31% of the persons on the list.  Along with LB 376, a bill to authorize the Department of Health and Human Services to apply for a new Family Support waiver heard by the Legislature’s Health and Human Services Committee, she hopes to make headway in getting services to adults and children with developmental disabilities. Jenny Koley testified telling of her experience living independently but with supports. Denise Gehringer testified as a family with a member who has developmental disabilities.  Thank you, Jenny and Denise. 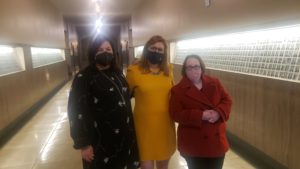 Jenny Koley, Denise Gehringer and Senator Machaela Cavanaugh outside the hearing room after the hearing.

There are a lot of questions about those unable to work during the current crisis. First I want to thank the Nebraska Department of Labor and the Governor for their quick response to the pandemic, and for the work of. Below are resources available for those unable to work or working reduced hours during:

Short-Time Compensation https://dol.nebraska.gov/stc
● Employers can apply for this program.
● For those still working but limited hours during the pandemic period.
● The Short-Time Compensation program allows employers to uniformly reduce affected employees’ hours by 10 to 60 percent while permitting the employees to receive a prorated unemployment benefit.

Unemployment Insurance https://dol.nebraska.gov/uibenefits
● For those who are not able to work and not receiving a paycheck during the pandemic period. (If you are working from home or using sick or vacation leave then this does not apply to you)
● Under the executive order signed by Governor Ricketts starting March 22 through May 2 the following will be in place for unemployment insurance:
○ The waiting week for benefits has been waived
■ Benefits will begin immediately and not with the usual first week unpaid.
○ The work search requirements will be waived
■ Individuals will not have to apply to jobs in order to receive benefits. It will be assumed that they will be able to return to their jobs after the crisis is over.
○ Benefits will not be charged against individual employers accounts.
■ Money will be paid out of the general trust fund as the job losses are not the fault of individual employers.
■ Nebraska’s Unemployment Insurance Trust Fund is well funded and is expected to handle the increased number of applications.

Other Important Considerations
● Please bear in mind that there are expected to be long wait times when calling the Department of Labor. This is due both to the increased demand and the Department is also dealing with the same issues as all employers. If you cannot get through it is best to leave a call back number and you will be called back.
● Currently these programs do not apply to contractors or self employed individuals as they do not participate in the unemployment system. There may be coming Federal action to help these individuals. Please contact your Federal representatives.
● As we are aware the situation is changing rapidly. The Department and the Governor with his emergency powers can respond quickly as needed. We have been in close contact with the Department of Labor and will keep you updated.

I met with the Health and Human Services Committee, Transportation and Telecommunications Committee, the Appropriations Committee, and multiple testifiers at hearings today. At the hearings, 3 of my Legislative Resolutions were discussed. The first was LR 116 which is to examine the long-term fiscal sustainability of the Nebraska Health Care Cash Fund. The second was LR 179 which examines the fiscal impact of the Supplemental Nutrition Assistance Program and childcare subsidies. Last was LR 174, which examines the Highway Trust Fund and finds ways to increase transit infrastructure in areas with limited access.
I will keep you updated as we discuss these and my other Legislative Resolutions as we continue in the interim. If you would like to know more about this, or if you have any questions, please do not hesitate to contact my office at
(402) 471-2714 or emailing mcavanaugh@leg.ne.gov.

Posted in Uncategorized
Urgent Update: Youth Rehabilitation and Treatment Center – Geneva
September 20th, 2019
Dear Constituents,
On Thursday, August 15, I, along with five of my colleagues and several legislative staff, took a tour of the Lincoln Regional Center (LRC). It is part of the legislatures job to provide oversight of state agencies. As a member of the Health and Human Services Committee, it is my job to oversee the work of the Department of Health and Human Services. As a freshman Senator, the tour of LRC was my first foray into firsthand viewing and oversight of DHHS outside of committee work.
Yesterday, Nebraskans read the Lincoln Journal Star article about the Youth Rehabilitation and Treatment Center-Geneva (YRTC-G). The four senators who visited the YRTC-G have been in contact with the entire legislature and updated us on the situation. The conditions are as treacherous as initially reported in the Lincoln Journal Star. You can read a full account from the Inspector General’s office attached here.
Here is what I would like to communicate to my constituents (and all Nebraskans):
Child welfare is my top priority and I will spend everyday of my term working to ensure that Nebraska’s children are cared for.
Best,
Machaela
Posted in Uncategorized