Let’s hear it for fiscal responsibility!

Nebraska is one step closer to providing a viable future for our future generations. LB 713, or the PLAN Act, has been advanced to Select File!

The population of Nebraska is increasingly urban, aging, and racially and ethnically diverse. However, our current fiscal situation for the state is not set up to support our changing demographics. Not only are we constitutionally prohibited from incurring debt, but revenue has been volatile over the past two biennial budgets and the Legislature has depleted cash reserves with no plan or projection to restore the balance in anticipation of future downturns in revenue or economic cycles.

LB713 adds a new step in the legislature’s budgeting process by requiring the Legislative Fiscal Analyst to create additional revenue and budget reports throughout the biennium. These reports include: a revenue volatility report in even-numbered years, a budget stress test in odd-numbered years, and a long-term budget for major programs every four years.

I think it is time that we get excited about genuine fiscal responsibility that ensures our state is prepared to support “The Good Life” for future generations of Nebraskans! 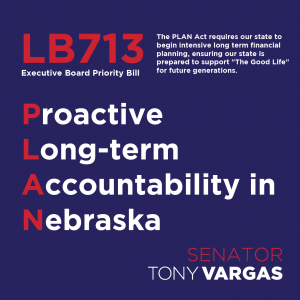