The content of these pages is developed and maintained by, and is the sole responsibility of, the individual senator's office and may not reflect the views of the Nebraska Legislature. Questions and comments about the content should be directed to the senator's office at bhansen@leg.ne.gov

This column covers legislative days 51 through 54.

Greetings to all in District 16.  This was the 13th week and Friday was the 54th day of this 90-day session.  We hit some roadblocks early, but by the end of the week we had successfully worked through a number of bills, passing them through the first round of debate.  Some of the more interesting bills voted on this week include one to prohibit the tattooing of eyeballs, a bill to allow students with school permits to drive to more school functions, and a bill to expand the options for internet access in the state.

One of the most important bills of the week was discussed on Friday.  LB 512 introduced by Senator Linehan of Elkhorn is a fairly complex bill with many working parts.  The most pressing is a section that would offer relief to property taxpayers for damage or destruction due to a natural disaster.  Though the bill was introduced on January 22nd, long before the flooding, it is needed now more than ever.  LB 512 offers relief by allowing property owners whose property has been damaged to request a reassessment of the property value for tax purposes.

The potential for relief provided by this bill would be experienced far and wide by those in our region and throughout the state. Despite the importance of the bill and the overwhelming need for financial relief by those affected by the flood, it faced opposition.  Opponents of the bill claimed it would cost the county money and another senator opposed the bill because of disagreements earlier in the session about unrelated matters.  These senators are in the minority, and I’m confident the bill will pass and relief will be provided to those who need it most.

One of the more enjoyable roles of a senator is greeting the 4th graders who come on field trips to the state Capitol. This week I met and spoke with students from Fort Calhoun and Tekamah Herman and last week we had visitors from Arlington.  Seeing the students’ excitement and energy to be in the Capitol is a great break from legislative work and one I look forward to whenever I know students are coming. 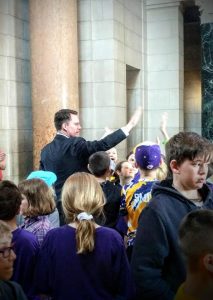 As a member of the Health and Human Services Committee, we are tasked with oversight of the implementation of Medicaid expansion that was voted on last year.  The committee has begun the process and though it promises to be a long road with a steep hill to climb, we’re dedicated to implementing the expansion in an effective and efficient manner for those receiving services and for the taxpayers who are funding the program.

Lastly, reported this week was an initial quick release of $25 million in federal funding towards road repair.  A project along highway 91 is expected to begin soon, though patience from the public is encouraged during road reconstruction projects.  To read more about road repair and reconstruction efforts, visit https://dot.nebraska.gov/news-media/nebraska-flood-2019/.

If you have questions or comments, please contact the District 16 office at (402)-471-2728 to speak with my Administrative Assistant, Ellie Stangl; or my Legislative Aide, Jacob Campbell.  You can also email me at bhansen@leg.ne.gov.  To follow along with the session please visit nebraskalegislature.gov or you may watch the live stream when available at netnebraska.org