SINCE End of Session…

The 2019 Legislative session officially ended a little more than a month ago. The work we did was hard, but as a whole the 106th Legislature accomplished a great deal. Of course this doesn’t mean our work is done, far from it. We are well into the next phase as my office works on details and decisions regarding what bills to bring come January. If you have a topic you think needs attention, please don’t hesitate to contact my office. As always, the sooner you call, the better, I like having our ducks in a row before the new session begins. Wishing you all a relaxing summer of fun!

The 2019 Bellevue, Nebraska
Farmers’ Market
Every Saturday – May 25, 2019 to September 7, 2019
7:45 am to Noon – Rain or Shine
Live music at 9 AM
Washington Park located at 20th and Franklin in Bellevue, Nebraska
Early Birds welcome, and get the pick of the best produce.
FOR MORE INFORMATION CALL 402-517-1446
Senator Carol Blood, Volunteer Market Manager
We hope to see you there! 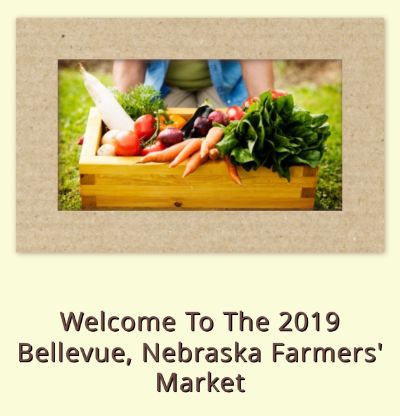 Working to Keep the Wheels Moving for District 3 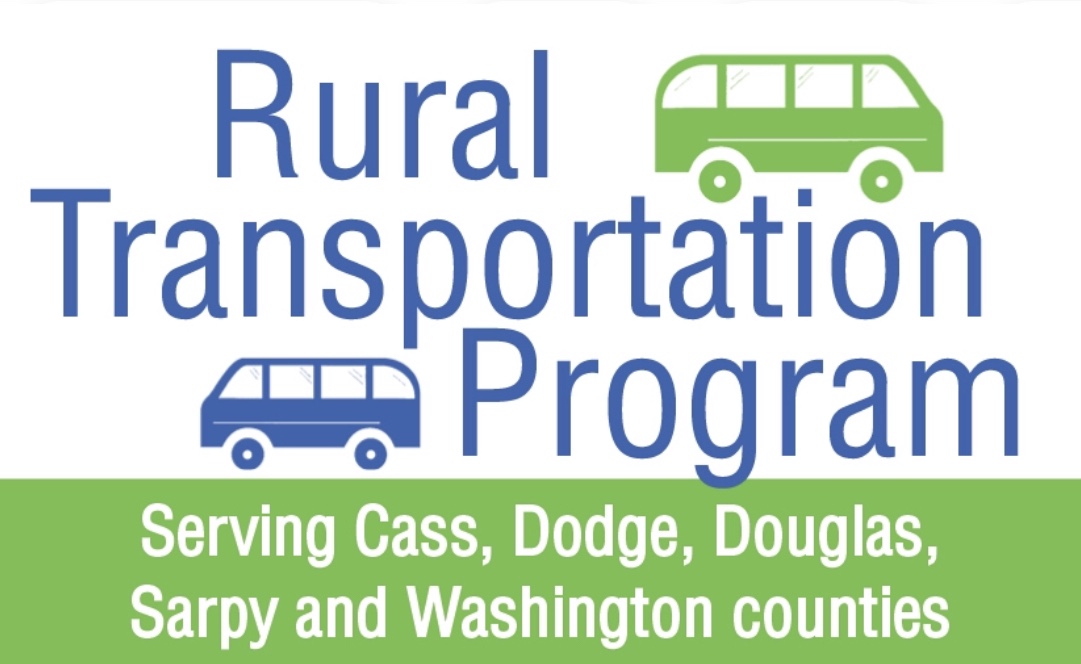 On June 18th I attended a public meeting to address a loss of funding for the Rural Transportation Program (RTP) a ridership program provided by The Eastern Nebraska Office on Aging (ENOA) currently serving Cass, Dodge, Douglas, Sarpy and Washington Counties. RTP is utilized by the general public, elderly and individuals with disabilities for any transportation needs they may have.

On May 12th ENOA was notified they must stop service to some areas by July 1st in order to remain in compliance with the federal grant distributed by the NDOT, who receives their money from the Federal Transit Agency (FTA). ENOA matches these grants with funds received from passenger fares, and revenue from each county served. Problems arose following the last census taken in 2010 when certain service areas were re-classified from rural to urban, those changes directly affect parts of Bellevue, Western Omaha, Papillion and Gretna.

Questions I had during this meeting led me to begin reaching out to the different agencies overseeing the program and its monies, while bringing in stakeholders to help find a stop-gap solution until one more long-term, can be found. I, along with my staff and a host of other concerned individuals are working diligently to find adequate service solutions for those who might otherwise be forced to find other means of travel. Feel free to reach out to our office for updates or if we can answer any questions. We will share a synopsis of the results in our next interim newsletter. Nebraskans with disabilities and our seniors deserve better. 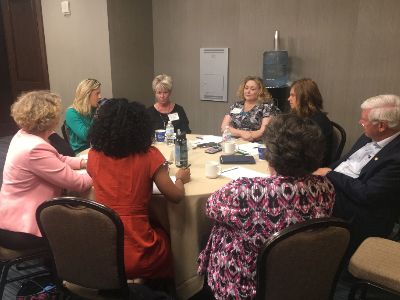 The Nebraska Team with Senators Crawford and Hilkemann
Research provides us with comprehensive evidence that the first five years of life are the most significant in setting a strong foundation for both learning and health. Inequitable circumstances and lack of access, support systems, or available information, can all create gaps in early development. Making an investment in these years is of vital importance to every state, none more so than in Nebraska. This is an important factor in Nebraska’s future economic success as well. I was grateful for the opportunity to learn best strategies for achievement and the latest efforts to bring the message home from the folks at The Hunt Institute in Durham, North Carolina, and the BUILD Initiative of Boston.
The Nebraska State Police Award Badges to 14 New Members 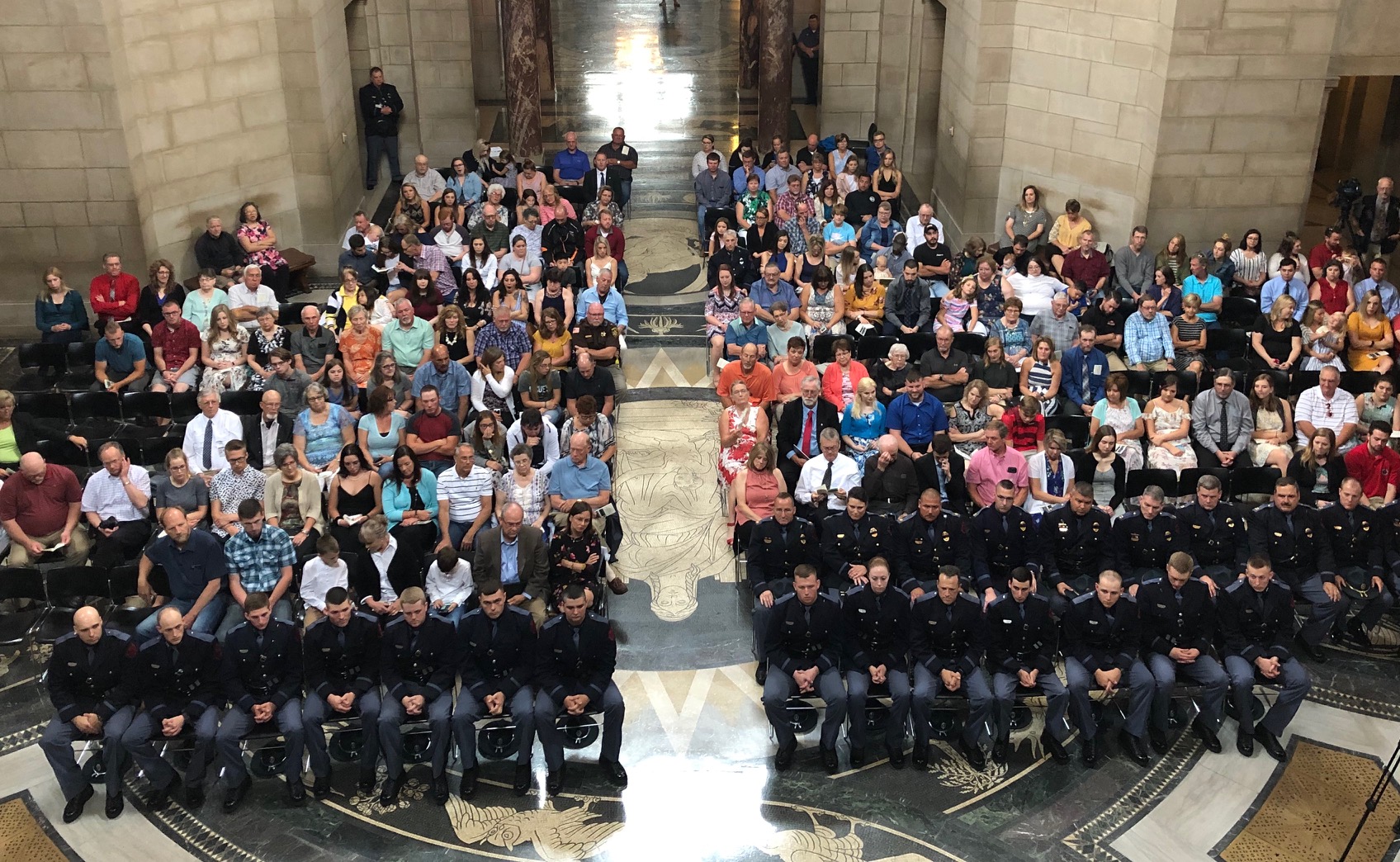 In a ceremony held at the Capitol last week, fourteen new Nebraska State Troopers received their badges. The new troopers represent the 60th Basic Recruiting Class in the history of the Nebraska State Police. 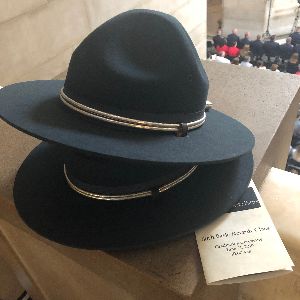 This ceremony came one day after Nebraska lost dedicated patrolman, Trooper Jerry Smith. “Through that tragedy, we look upon these 14 new troopers starting their careers and truly understand what it means to serve.”  Offered Colonel John Bolduc, Superintendent of the Nebraska State Patrol.

Each member of the class of Camp 60 completed 22 weeks of training at the NSP Training Academy in Grand Island. Those newly-badged patrolman will now undergo six months of on-the-job training with veteran troopers in the field. 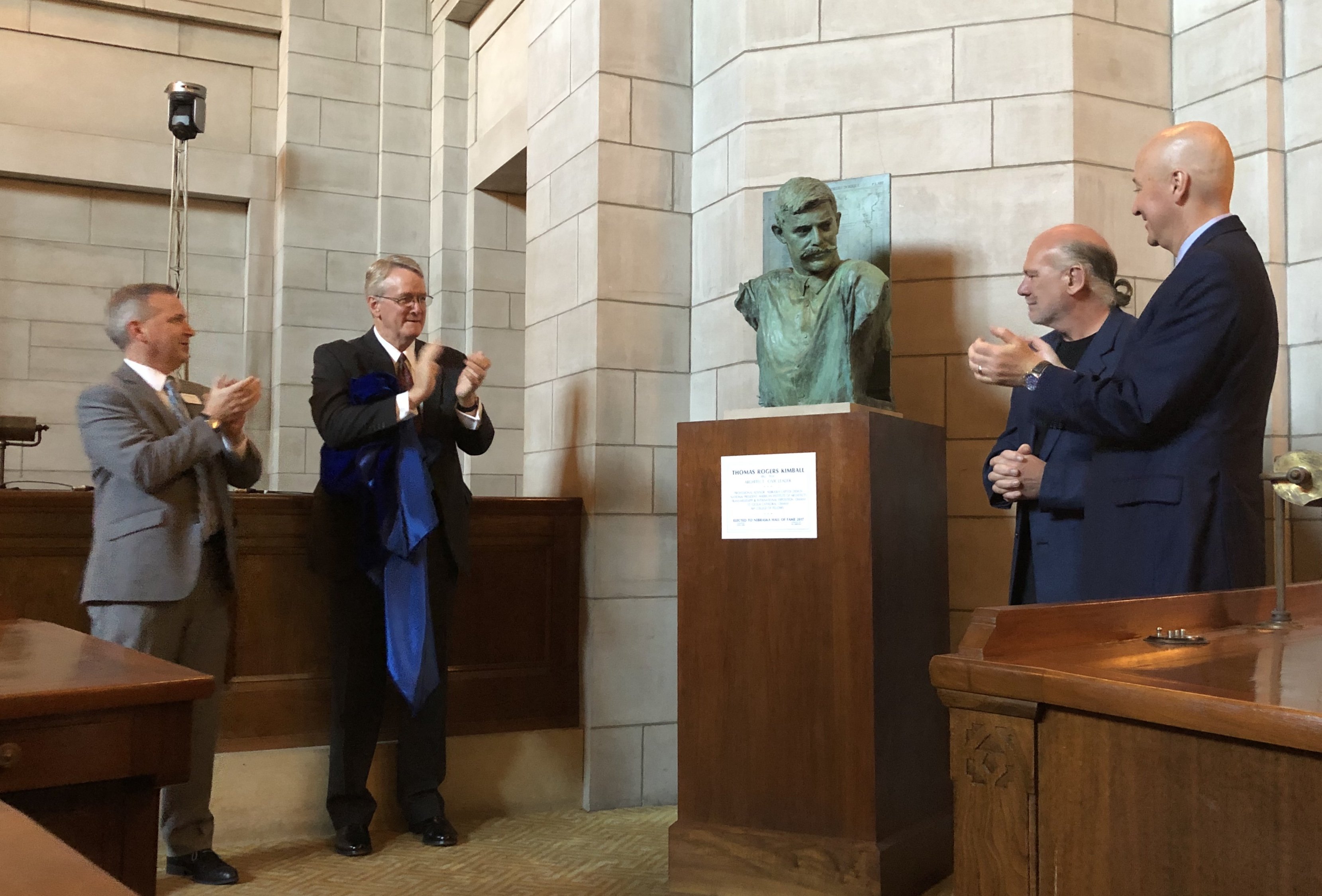 Thomas Rogers Kimball was an American architect and first Nebraskan to serve as the National President of the American Institute of Architects. He was credited with 871 commissions, but Kimball’s greatest contribution to Nebraska was his position as architectural adviser to the Capitol Commission, where he oversaw and administered the construction of our Nebraska State Capitol.

On June 25th, TRK, as his great nephew calls him, was inducted into the Nebraska Hall of Fame which recognizes individuals who have made significant contributions to the lives and history of the great state of Nebraska. At the ceremony to honor Mr. Kimball, those who gathered for the celebration were gifted the opportunity to hear a little of his life and history. Mr. Kimball will be remembered with the placing of a bust sculpted in his honor by John Lajba, of Omaha. Many thanks to Lana Hatcher with History Nebraska, for the invitation to attend the ceremony.

It Truly was A Day of Unity 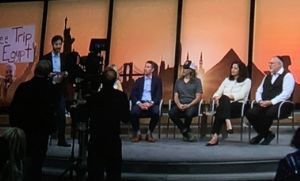 Live from Washington DC
I was thrilled to host Nebraskan’s who came from all over Eastern Nebraska to join together with thousands of other US residents in over 500 theaters to view a one night only screening of the movie Free Trip to Egypt as part of the #PledgeToListen day on June 12th. The movie was followed by a live panel discussion from Washington DC. 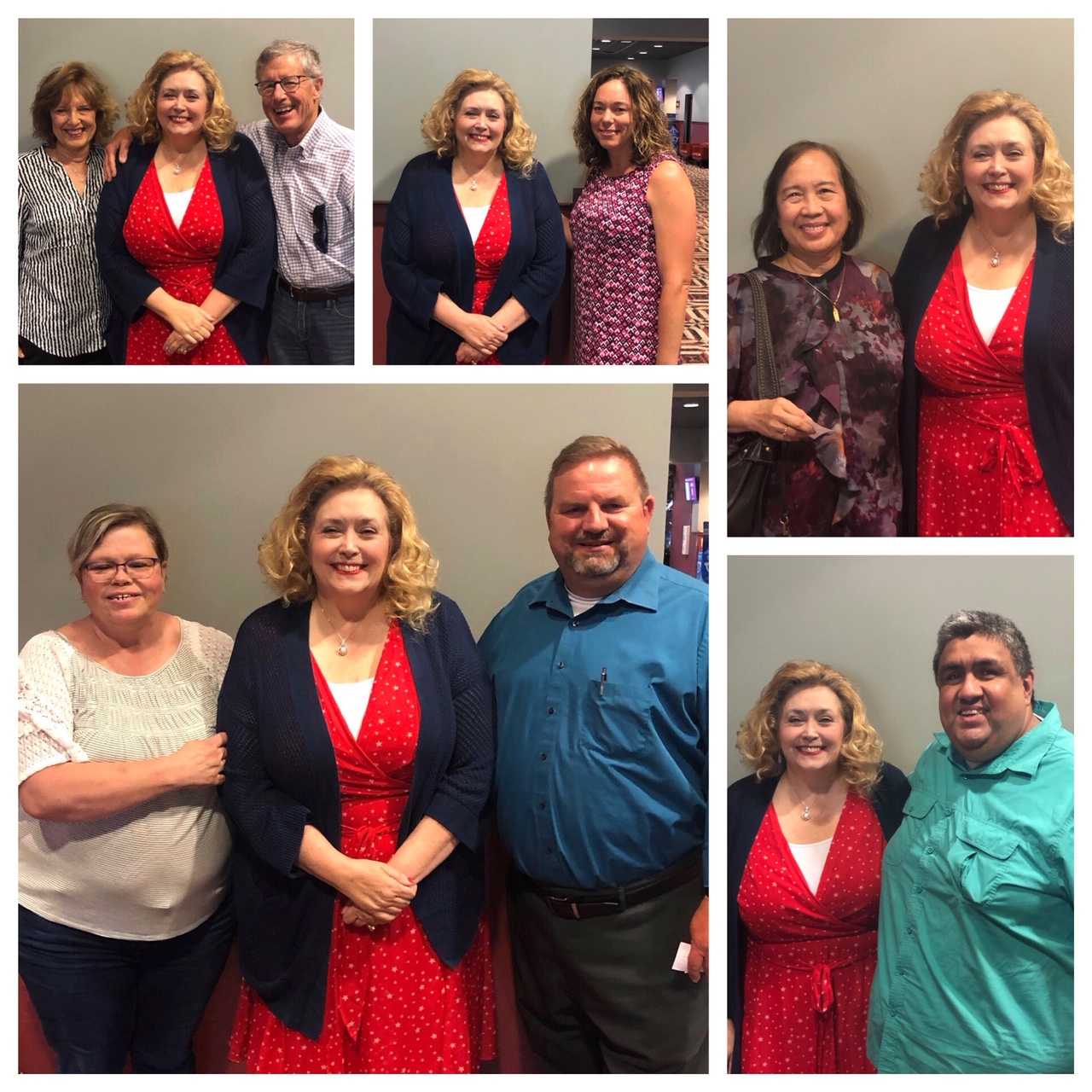 Friends who joined us for the screening!
Top L-R Deb and Senator John McCollister, Angie Lauritsen,
Angelina Ramos, Lorri and Kelly Sell, and Edward Ventura, JR.
Have you taken the Pledge?
Pledge to #ListenFirst by joining the movement to mend
the frayed fabric of America one conversation at a time
Young Women Leaders of Tomorrow
Girls State 2019

Wednesday, June 5th I had the distinct honor of speaking to almost 400 young women from all over Nebraska who were in Lincoln to attend the American Legion Auxiliary Cornhusker Girls State 2019.

Modeled on a citizenship training program originally formed for young men, the American Legion Girls State offers training in the process of governing and citizenship. Each summer approximately 25,000 young women participate in Girls State sessions across the country. At Girls State the delegates study local, county and state government. The young women participate in mock political parties, hold mock elections, filling positions just as we do in city, county and state government.

The time I spent with these young women left me feeling great pride. The enthusiasm they openly shared with me during my speech filled me with hope and further motivates me to continue to support Nebraska’s young women to run and win in our upcoming elections.

Honored to be escorted out to a standing ovation following my speech. 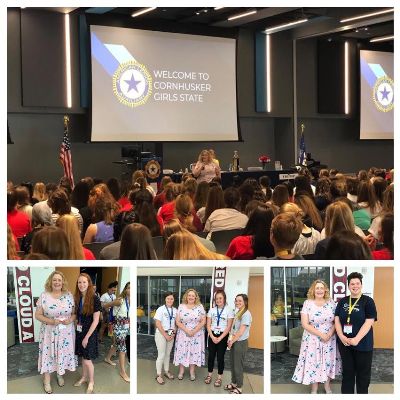 The National Foundation for Women Legislators (NFWL) is launching their 2019 Annual Student Scholarship Program in early June. Scholarships will provide six women high school juniors or seniors a $3,000 college scholarship, an all-expense-paid trip to NFWL’s Annual Conference, and an award to be presented at the event.

Nebraska Students must be nominated by a currently elected woman serving in Nebraska, before they are invited to apply for the scholarship (which includes completing a short essay and submitting a recommendation letter from a teacher or employer).

I am encouraging all young women in the state who are interested in policy or public service to participate by seeking an elected woman to nominate them to receive one of these six available scholarships.
All nominees must be:

We are here to serve the residents of District 3 and we are happy to respond to any questions or concerns you may have.
Did you know that there is a long list of items available for free to the public relating to the Nebraska Legislature? Here is a list of only a few that you might find interesting. If you are receiving this email digitally, you should be able to link to the information from your newsletter.
1. Unicameral Update
2. About the Legislature
3. Unicam Kids
4. Inside Our Nation’s Only Unicameral
5. Poster of Nebraska Senators
6. Membership & Committees Card
7. Lines of Government
For hard copies of these documents, please call my office at 402-471-2627 and we will be happy to place one in the mail to your home address.
Posted in Uncategorized