Lincoln, Nebraska – State Senator Megan Hunt is concerned but amused by the precedent set by Senator Mike Groene and the thirty other state senators who cosponsored LR 107. LR 107 is a blatantly partisan and frivolous resolution, which relates to subjects including election laws and voting rights, free exercise of religion, federalism and sharing of powers with the federal government, states’ rights as provided in the 9th and 10th Amendments, First Amendment rights, Second Amendment rights, healthcare and vaccines and the right to assemble and travel, a rejection of “vaccine passports,” and the private use of land and water. In keeping with this precedent set by Senator Groene and the thirty cosponsors of LR 107, Senator Hunt has introduced LR 130 to acknowledge the urgent threat of climate change and affirm the Nebraska Legislature’s commitment to advancing policies designed to mitigate it.

LR 130 is the third in a series of legislative resolutions Senator Hunt is introducing in response to LR 107. “I ask the members of the body who signed onto LR 107 to read it carefully and remove their names, and I call on the members of the Executive Board to exercise integrity and keep this bad resolution from advancing to the floor”, said Hunt.  A hearing on LR 107 was held last Thursday.

“Resolutions are not frivolous, and any resolution passed by the Nebraska Legislature may have consequential legal significance. We do not know how or whether another governmental body will interpret any given resolution we pass, whether that body is another state legislature, a state or federal court, or a governor or attorney general. Resolutions we pass, including the embarrassing and poorly-written LR 107, could be interpreted by courts as binding, or at a minimum, as formal findings of the Legislature on the particular subjects implicated in the resolution. For that reason, the thirty-one senators who sponsored LR 107 should be aware of the precedent they are setting and the door they are opening for blatantly partisan governance that does not reflect the values of Nebraskans,” Hunt said.

Additionally, LR 107 raises concerns about legislative leaders circumventing rules and procedures in the officially nonpartisan Unicameral.  LR 107 was originally correctly referenced to the Government, Military and Veterans Affairs committee according to legislative rules and established history. However, the Executive Board, which has the final word on where bills and resolutions are referenced, moved LR 107 to their committee in an apparent attempt to route the measure away from the Government Committee, where LR 107 would not have garnered the votes necessary to advance. The introduction of LR 130 follows a motion by Hunt to re-reference LR 107 in accordance with good governance, which failed to gather enough votes to pass. Nebraskans should be concerned about this precedent of “committee shopping,” moving bills and resolutions into committees where the political majority is likely to get a favorable outcome.

A copy of the resolution is attached. 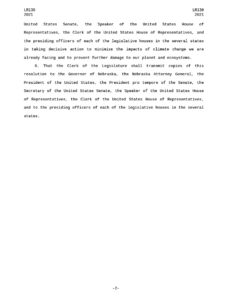