The Health and Human Services Committee (HHS) introduced LB 1140 to address long-overdue reforms to the Youth Rehabilitation and Treatment Centers (YRTC) in Nebraska. This bill emerged from a joint interim study and a report conducted by the HHS Committee.

The increased oversight and changes are a response to worsening violence, escapes, and inhumane living conditions found at these facilities. This issue is currently being debated on the floor, and you can watch the live coverage here.

LB 1140 is composed of five other bills to address vital changes and updates to the YRTCs. Below are the proposed changes:

The Department of Health and Human Services indicated they would need to construct additional buildings at the YRTC in Geneva for “appropriate physical separation and segregation of juveniles based on gender.”

Danette Smith, CEO of DHHS, made a statement that has promised to strengthen existing protocols. They also started a committee called the “Future State Planning Committee for Nebraska’s Youth Care System” which includes discussions on the YRTC.

LB 1144 is brought by the HHS Committee as a package to provide legislative oversight to the YRTCs. It will require annual facility reviews of YRTCs and creates a YRTC Legislative Oversight Committee.

LB 1188 is a package of bills to provide for YRTC education and programming. It includes LB 1147 and LB 1149, introduced by Senator Vargas.

LB 1148 creates YRTC judicial oversight by combining LB 458, LB 906, LB 969, and LB975. These bills clarify access to information, records, and reports relating to juvenile court. It also requires monthly updates to be provided to a court when a juvenile is placed at a YRTC.

The Legislature has passed the mid-point of this year’s session. Committee hearings concluded on February 27th and the Legislature moved to all-day debate on March 3rd. To allow the Legislature to debate more bills, we will enter into late nights on March 18th. Below are just a few of my colleagues’ priority bills I want to highlight.

Senator Patty Pansing Brooks prioritized LB 627 which prohibits discrimination based upon sexual orientation and identity. This bill addresses the systemic discrimination against people in the LGBTQ+ community. Together we can move Nebraska forward by embracing all Nebraskans. LB 627 will help keep local talent in our state. The diversity of thought, perspective, skills, and strengths enhances Nebraska’s economy. We must embrace inclusion and do the right thing. This bill will be heard in the coming days on General File.

Senator Kate Bolz prioritized LB 43, which adopts the Sexual Assault Survivors’ Bill of Rights Act. This bill is currently on Select File. It provides for certain rights for victims of sexual assault-related to physical examinations, interviews, or depositions arising out of the assault. We have a duty to protect these people by ensuring they have an advocate and giving them the tools to move forward. In an article by the Omaha World-Herald, Angie Lauritsen said, “If we truly want to curb sexual assault and trafficking in our state by bringing perpetrators of these crimes to justice, we must support LB 43. When survivors of sexual assault feel safe and supported throughout their interaction with medical and legal processes, they are more likely to report their assaults, and we, as a state, are more likely to hold perpetrators accountable while achieving safety for our communities and justice for survivors.”

Senator Ernie Chambers prioritized LB 924, which changes provisions relating to racial profiling and requires law enforcement training on this issue. This bill is currently on Final Reading. It requires certified law enforcement officers to complete a minimum of two hours of “anti-bias or implicit bias training” per year. LB 924 addresses our implicit biases that have been woven into the fabric of our society since it formed. These biases and stereotypes can turn minor encounters with law enforcement officers into dangerous and potentially deadly ones. We must train our officers to protect and serve all of us.

Senator Adam Morfeld prioritized LB 997, which adopts the Out-of-Network Emergency Medical Care Act. This bill is currently on Final Reading. The purpose of this bill is to avoid consumers being subjected to “surprise billing” in emergency situations by out-of-network providers or facilities. Our country’s healthcare is the world’s most expensive. The United States spends twice as much on healthcare as 10 other high-income nations. Health care is a human right and must be accessible and affordable to everyone.

Senator Machaela Cavanaugh prioritized LB 1060, which includes hair textures and protective hairstyles within the definition of race under the Nebraska Fair Employment Practice Act. This bill is currently on Select File. The purpose of this bill is to expand the definition of race for the purposes of employment discrimination to include traits historically associated with race, such as hair texture and styles (braids, locks, etc.). It addresses how professionalism is tied to European standards and that restrictive grooming policies have unfairly targeted black workers and students more than any other group.

On March 2nd, I joined my colleagues at the UNO Women’s Policy Forum to discuss the impact electing women has on our communities and our laws. I was joined by several other women in the Legislature.

Many elected officials vote on issues from a position of their own experience, and many people, because of their experience, forget to consider how issues affect not only women but people of color, incarcerated people, children. In my experience, speaking generally, women are the ones who tend to think more about these groups of people, because we come from a place of inclusion, we’re used to supporting people in our communities, and that has been my experience with working with these women in the Legislature. Grateful to UNO for elevating the women of the Legislature and facilitating a conversation about women in leadership. 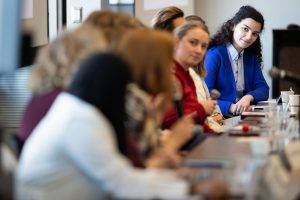 On March 9th, I met a bright and engaged group of students from Lincoln who took time from their spring break to come to the Capitol and learn about the Unicameral! We talked about climate change, non-discrimination, and answered a lot of questions about our lawmaking process. The days that I get to talk to kids are my favorites. 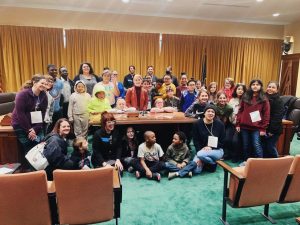 You are currently browsing the archives for the Uncategorized category.