On Thursday the Supreme Court of the United States (SCOTUS) revealed its decision in the case of South Dakota v. Wayfair, Inc. The high court closed a loophole in the law which has prevented states from collecting sales taxes from online venders. SCOTUS had created the problem back in 1992 when they ruled in Quill Corp. v. North Dakota that states could not collect sales taxes from a business unless the business had a substantial connection to that state. But, thanks to the high court’s ruling on Thursday, states now have the legal authority they need to pass legislation to begin collecting these monies.

I, as well as other legislators, such as Sen. Dan Watermeier of Syracuse and Sen. John McCollister of Omaha, saw this ruling coming. Therefore, they introduced LB44 and LB564 respectively, which would have required remote sellers to collect sales taxes, and I introduced LB601 which would have directed all revenues collected from these remote sellers to the Property Tax Cash Credit Fund. Unfortunately, none of these bills were passed into law.

Writing for the majority in the 5-4 ruling Supreme Court Justice Anthony M. Kennedy indicated that the 1992 Quill decision had cost states up to $33 billion annually in lost revenues. Furthermore, a recent report released by the United States Government Accountability Office noted that Nebraska could stand to generate anywhere between $69 million to $97 million dollars annually in state and local revenues through the collection of these online sales taxes. This is money which could have reduced your property taxes next year had the legislature taken appropriate action and passed either LB 44 or LB564, and my bill LB601.

Unfortunately, lawmakers and lobbyists have already begun frothing at the mouth! Because the Legislature failed to pass LB601, lawmakers and lobbyists are already salivating over all of the creative ways they can think of to spend this extra revenue flowing into the state’s coffers, even though lawmakers still need to update our laws. Make no mistake about it, in the days ahead you will continue to hear Hank Bounds whining about state funding for the University of Nebraska, and Nebraska Appleseed will never stop crying for Medicaid expansion. But none of these fine institutions needs this money as much as you do, and that is why I introduced LB601.

I reside in Morrill County. Morrill County has a population of 5,042 people, according to the 2010 Census. From 2006 – 2016 we saw our countywide property taxes increase more than $1 million per year. That is a ten year increase of more than $2,000 per person or an increase of more than $8,000 for a family of four. These kinds of trends are not sustainable. Because of these increases in our property taxes, farmers have begun selling their farms and moving to other states. Agriculture is the engine which drives the economy of our state. Perhaps, that is why Governor Ricketts announced after the ruling that “Any increased revenue attributable to total enforcement of our sales tax laws must be steered towards property tax relief.” I wholeheartedly agree!

Posted in Opinion
If Funding Went Up, Why Slice UNK Sports?
May 15th, 2018

Now that the legislative session is over, it is time to reflect on what actually was accomplished this year and how it affects all Nebraskans. Although we balanced the budget, we did so by taking more money out of the state’s rainy day fund. While some cuts were made to the budget, the income for some state agencies actually increased. One such state agency was the University of Nebraska system.

If operational revenues have truly increased, and the Independent Auditor’s Report says they have, then why were cuts made to programs at the University of Nebraska – Kearney (UNK)? UNK is cutting three sports programs, namely baseball, golf, and tennis. It is peculiar that UNK would make the decision to cut the baseball program, especially after a recent fundraiser had raised $170,000 for the program.

The decision to make these cuts to these three sports programs was the sole decision of UNK Chancellor Douglas A. Kristensen. When University President Hank Bounds testified before the Appropriations Committee earlier this year, he was asked who would make the decisions about cutting programs. Bounds answered that each of the chancellors would make these decisions for their own schools.

UNK claims that eliminating these three sports programs will save the university $450,000 annually. But, what they haven’t considered is the fact that these 60 athletes, who would have attended UNK and played on their sports teams, would have each brought with them into the university an additional 1.2 students. Tuition costs alone (set at $7,512 for 2018-2019) for these additional 72 students would bring $540,864 into the University. So, the argument that cutting these sports programs would somehow save the university money, fails by way of simple math.

When it comes to balancing the budget at the University of Nebraska, administrators need look no further than their own administrative costs. Since 2011 administrative costs have increased 40 percent while new student enrollment has increased only 6 percent. On September 16, 2016 the Board of Regents gave University President Hank Bounds a 6 percent salary increase, which became retroactive back to July 1, 2016. In spite of the Governor’s announcement on July 16, 2016 that there should be no more salary increases, no unnecessary travel, and no new hiring, Bounds gave 3 percent salary increases to each of the chancellors in the University of Nebraska system.

So, the time has come for all concerned Nebraskans to ask Chancellor Kristensen: Why are you really cutting baseball, golf and tennis? If Kristensen won’t explain why he is cutting these programs, then perhaps it is time to ask the Regents. The Regent for District 6 is Paul R. Kenney and he can be reached at (308) 826-2507. 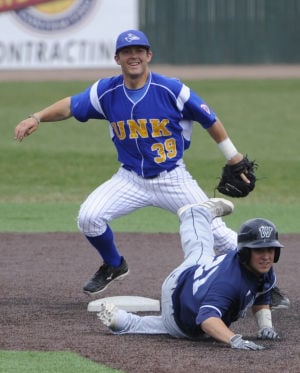 You are currently browsing the archives for the Opinion category.